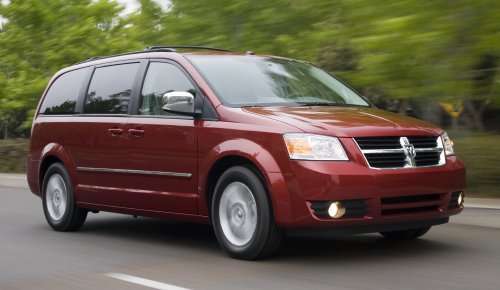 This morning, the Chrysler Group announced a recall of 299,718 examples of their popular Dodge Caravan and Chrysler Town & Country minivans over a concern that the operating unit for the airbag could fail – possibly causing the airbags to open without proper cause.
Advertisement

This new recall specifically relates to model year 2008 Dodge Grand Caravan and Chrysler Town & Country models - all of which were previously recalled this past January for an HVAC problem. In these 299,718 vehicles, the Heating, Ventilation and Air Conditioning (HVAC) drain grommet that allows condensation and moisture to escape was found to be faulty. When the drain failed to function, moisture could accumulate and back up, overflowing onto the Occupant Restraint Control (ORC) or in other words the brains of the airbag system. Even though Chrysler addressed the issue causing the moisture to get to the ORC, engineers have discovered that had these control units gotten wet - even if they drainage problem was addressed as part of the January 2011 recall – the previous presence of moisture could cause the circuit boards in the ORC to fail prematurely.

When the electronics within the Occupant Restraint Control module fail, the airbag and restraint system may not work properly which could include the airbags not opening in the event of an accident. An ORC failure could also cause the airbags to open without cause and with the risk of an airbag opening while driving down the street presenting a very clear danger, Chrysler has made the call to get these 299,718 Dodge and Chrysler minivans back to dealerships for servicing.

Chrysler points out that they are unaware of any actual instances of the moisture causing deterioration of the ORC module but based on the simple fact that it COULD happen, Chrysler is taking the high road and doing what they can to prevent anyone from getting hurt. David Dillon, Head of Product Investigations and Campaigns for Chrysler had this to say about the new recall:
“Despite the lack of field reports, we believe it is in the best interest of our customers to replace these modules to ensure the proper functionality of the minivan’s advanced safety system.”

The Chrysler minivans airbag system recall is expected to officially begin in September, when owners will be asked to return to their local Chrysler Group dealership where the ORC will be replaced free of charge. Of the 299,718 vehicles, 232,086 of them are found in the United States with another 50,251 in Canada, 3,748 in Mexico and the remaining 13,633 examples were shipped to other markets around the world.

Anonymous wrote on August 5, 2011 - 8:44am Permalink
We own a 2001 Dodge Caravan and the air conditioning on the passengers side has been leaking for a few years and the floor is always wet. It is very smelly and it is causing the floor of our van to rust and have holes in it. We have had it checked out several times and nothing was found. I hope this does not prevent our airbag from working.