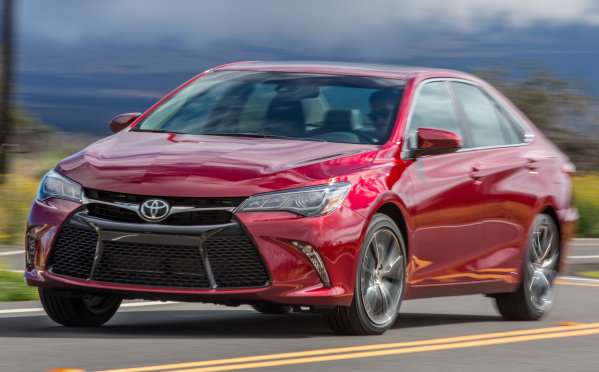 The 2015 Toyota Camry looks to further exorcise the ghosts of its past, with a surprisingly sporty new face serving as the perfect counterpoint to the new Ford Fusion that wears a higher end, more luxurious exterior design.
Advertisement

The Toyota Camry has been the bestselling car in America for many, many moons, but when Ford introduced their newest Fusion with a far more upscale look, the Motor Company thought that it would be the right move in helping to cut into the lead held by the Camry. While the midsized sedan segment in which the Fusion and Camry compete with other models like the Nissan Altima, the Honda Accord, the Chevy Malibu and the Dodge Avenger had once been easily dominated by cars that focused totally on function – and that lead to some car top selling cars that were, um, very vanilla. I hesitate to call them boring or really apply any negative comments, as those are the bestselling cars in America. They did everything that they needed to do, but they didn’t offer a whole lot of pizzazz inside, outside or on the road.

However, the auto industry has changed a great deal, so no longer can an automaker plan to succeed in the midsized sedan segment with a car that is little more than a rolling appliance. Toyota recognized that with their 2012 Camry refresh and they introduced a car that was far more aggressively styled than the outgoing models, but it wasn’t enough for many critics. Don’t get me wrong – the Camry continued to be the bestselling car in America with that 2012 refresh – but the push for midsized sedans with more personality brought big attention to models that took a bolder approach to styling.

One such car that took a big step towards making the American midsized sedan segment a whole lot more attractive was the 2013 Ford Fusion. Ford Motor Company took the relatively pedestrian-looking Fusion from a few years ago and molded it into a sedan that many people favorably compare to an Aston Martin. When combined with the super-efficient drivetrain options and the high tech interior, the 2013+ Fusion showed that you can have a roomy and efficient sedan with a luxury look that wont break the bank. Buyers who were first considering a less expensive luxury sedan found that the new Fusion checked all of the same boxes for far less money…giving Ford an edge on the competition. However, where the new Fusion attracts those buyers who are after a midsized sedan with a luxury feel, the 2015 Toyota Camry should attract those buyers who want more sport and less luxury from their daily driver.

Believe It or Not: Aggressive Styling on the Camry
I have to admit that when I first saw the 2015 Toyota Camry, I was blown away. I couldn’t believe that Toyota had gone SO extreme with the sporty styling of their most critical car, particularly with the premium XSE trimline. The car that has been criticized forever for being too vanilla suddenly has a face that is as aggressive as any other normal production model in the segment even without the XSE package, but that package (shown in the pictures here) are the perfect rebuttal to Ford’s classy new Fusion.

The crown jewel of the 2015 Toyota Camry XSE is the front end, which features a big, bold grille in gloss black with black mesh filler for a very high performance feel. The headlights have been redesigned inside and out, with a far more angular (and attractive) look on the body and a more high tech inner portion that carries a very high end look. Along the bottom of the front fascia are some sharp angles that are reflected throughout the body and a set of vertically mounted driving lights bring in a little Lexus flare. Even the hood has been restyled, with sharp lines flowing down to the front end to create an aggressive, almost angry look.

Along the sides, the new Camry has more sharp body lines that refute the slab sided midsized sedans that have dominated in the past while a set of sharp looking aluminum wheels perfectly fit the part of a sporty sedan. Even the back end has been dressed up a great deal, with angular taillights, a subtle rear spoiler and a lower fascia that has an integrated diffuser design with dual exhaust tips poking from each lower corner. Continuing to Dominate the Midsized Sedan
It isn’t the most aggressive sedan in America, but for an affordable midsized sedan, this new 2015 Camry is just aggressive enough to attract those buyers who want more personality from their daily driver while not turning off the tradition Camry buyers who want something more subdued. More importantly, the revamped interior of the 2015 Camry offers a similar touch of high technology to what you get in the Ford Fusion so while the midsized Ford stormed onto the market with a look that will appeal to luxury buyers, the 2015 Camry exterior design is sure to satisfy those buyers who want something that looks sporty on the outside with a well-appointed interior.

The Camry has had the power and the interior gadgets to compete with Ford’s Fusion for a few years now, but with the introduction of the angular new 2015 Camry – Toyota has penned a midsized sedan that will also compete based on exterior appearance alone. When someone is on the fence about what kind of car to buy, exterior appearance is what can first get a prospective buyer into the dealership and in my opinion, the new Camry has an edge on the lux new Ford Fusion.

Click any of the thumbnails above for a closer look at the Camry XSE and for more information on this sporty new model, click here!