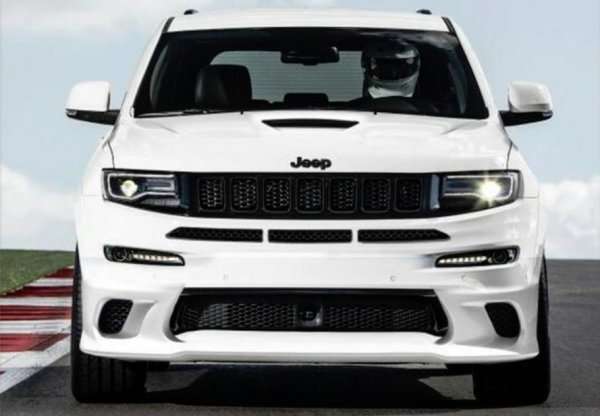 While it is unclear whether or not the new Hellcat powered Jeep Grand Cherokee SRT Trackhawk will debut this week in New York, a great rendering has surfaced on JeepTrackhawkForums.com showing a face that I could see being similar to the real thing.
Advertisement

First and foremost, I want to point out that this is not an official image of the Jeep Grand Cherokee SRT Trackhawk, nor do we have any real idea of when the Hellcat-powered SUV will first see the light of day. Rumors indicated that it would debut this week in New York, but some of the folks insisting that the Trackhawk would debut this week have now backed off of that in light of the Grand Cherokee Trailhawk – which is a far cry from a 707hp terror.

Maybe the Hellcat Jeep will debut this week and maybe it won’t, but if it does, it might look a little bit like the Jeep shown above.

Trackhawk Front End Rendering
This piece of artwork showing the 2018 Jeep Grand Cherokee Trackhawk with the SRT Hellcat engine comes to us from JeepTrackhawkForums.com. We have featured information from this forum in the past, as they often seem to have their thumb right on the pulse of the Hellcat Jeep world.

As you can see, the design of the Hellcat Jeep Grand Cherokee Trackhawk isn’t much of a departure from the current SRT Jeep with the 392 Hemi. The hood has a front facing scoop and a pair of heat extracting vents, similar to the design of the Hellcat Challenger and Charger. The headlights and grille are similar to the current SRT Jeep, but there is a new slotted area across the middle which would help draw in extra air –presumably through the intricate cooling system of the Hellcat Hemi.

Below the new openings, we see the driving light/fog light combo from the current Jeep, but that is where the similarities with the current Grand Cherokee SRT end. The lower fascia is drastically lower than the current SRT Jeep, with a huge central grille flanked by two large ducts for the brake cooling. This lower fascia area is very similar to the style of the Hellcat Charger, so a design like this would make sense for the production Trackhawk, both in form and function.

So, while this image isn’t an official look at the Jeep Grand Cherokee Trackhawk with the SRT Hellcat Hemi, but when that beast hits the road – and it has been promised by the end of 2017 – there is a good chance that it could look a great deal like the artwork above. As a Jeep fan, I could definitely live with this look.

Hunter Trimble wrote on March 24, 2016 - 10:04am Permalink
Can I please have photo credits? I have proof that I made this picture. My Instagram is: @hunter_trimble