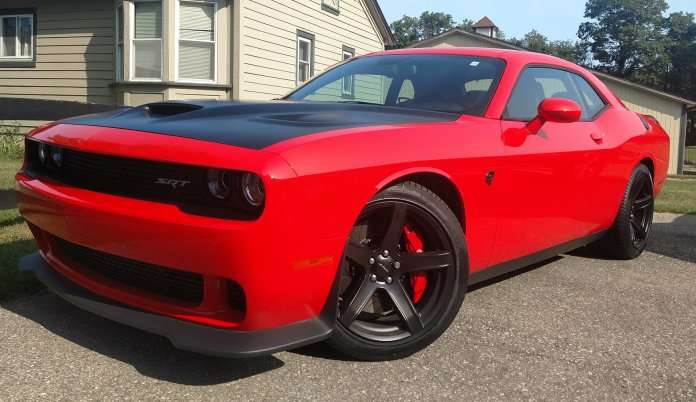 FCA has announced a recall for select 2017 Dodge Challenger SRT Hellcat and Dodge Charger SRT Hellcat models over a concern that one of the oil cooler lines could fail, possibly leading to a serious oil leak and – in the worst case scenario – engine failure.
Advertisement

If you own a 2017 Dodge Challenger or Charger in the SRT Hellcat trim, your 707 horsepower Mopar muscle car might need to make a visit to your local dealership. FCA recently announced that select examples of the Hellcat Dodge cars are being recalled due to a problematic oil cooler line, which could lead to an oil leak and that oil leak could (in theory) lead to engine failure.

In the affected Hellcat Challengers and Chargers, the lines running to the engine oil cooler may not have been properly assembled by the supplier, so the joint between the rubber hose and the metal fitted could fail. If that happens, the engine oil would likely leak out at a pretty healthy rate – quickly enough to cause the engine to run out of oil if you drove for a short distance. Some reports insist that oil could get up onto the windshield and make it hard to see, but that is farfetched to say the least. The real risk here is engine failure due to rapid loss of oil and when you have oil spraying around a hot engine bay, there is always potential for fire.

This problem was discovered after the company received warranty claims on the oil cooler lines of three Dodge Hellcat cars in a short period of time. Hutchings Automotive Products, the supplier of the oil lines, looked into the issue and found that a single batch of lines may not have had their metal fittings affixed properly – leading to the risk of separation.

Since this problem was first reported to FCA, there have been a total of 8 failures out of the 1,207 vehicles which are possibly affected, but there have been no reports of fire, accidents or any other incidents caused by the oil cooler line failure.

FCA recall T48 will officially begin on September 22nd, once the company has gotten an adequate number of replacement parts from the supplies, at which point these Hellcat Challenger and Hellcat Charger owners will be asked to bring their 707 horsepower muscle cars back to the dealership for repairs. Once there, the oil cooler lines will be replaced free of charge.

If you have a 2017 Hellcat Challenger or Charger and you previously paid to replace the oil cooler lines, you can received reimbursement for those repairs by providing proof of payment. Owners with any questions can contact FCA at 800-853-1403 in reference to recall campaign T48.