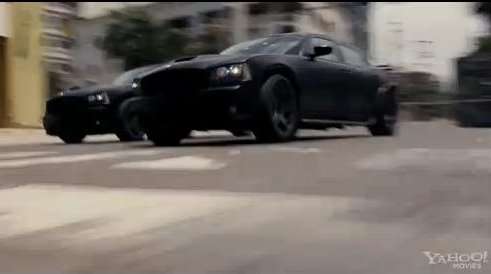 The folks at Universal Studios have unleashed the second trailer for the next chapter in the Fast and the Furious series, featuring a star-studded cast that could make Fast Five the best movie in the series thus far.
Advertisement

Ludacris, Paul Walker, Vin Diesel, and Tyrese Gibson form an all-star cast of Hollywood street racing superstars for Fast Five and what pretend-lawman can handle a group like that? Dwayne “The Rock” Johnson – that’s who. Unlike the first trailer that was really little more than a teaser, this second trailer gives us a good look at the cast and storyline of Fast Five. Paul Walker (Brian O’Connor) and Vin Diesel (Dom Toretto) are still up to no good, seemingly trying to steal a large sum of money from a police station in Brazil so to orchestrate the whole plan, they have made calls to the cast from previous Fast and the Furious movies. Needless to say, their plans of stealing a fortune from Brazilian police include plenty of illegal street racing, clubbing and smokin’ hot girls in tiny outfits – all the while being pursued by supercop Dwayne “The Rock” Johnson.

In addition to getting an idea on the storyline and the cast of characters, this second Fast Five trailer gives us a look at the vehicles included. We once again get a look at Ludacris’ 1963 Ford Galaxie, a 2011 Dodge Charger police car, a pair of blacked-out 2010 Dodge Charger SRT8s, a Ford GT supercar, a Nissan GT-R and the vintage Corvette roadster involved in what looks to be this FATF’s “ridiculous crash scene where everyone lives”. Interestingly, the 2010 Dodge Charger SRT8s appear to be the vehicles used in the big scene where Dom and Brian steal the massive safe full of cash, with a variety of scenes of the two outlaw racers shifting gears with a clutch pedal. The Charger doesn’t come with a manual transmission but if there is one thing that the Fast and the Furious movies have not focused on, it has been realism.

What we do learn from this new trailer is that Fast Five promises to have all of the street racing goodness that we would expect complimented by scantily clad hotties, spiced up by some vicious hand to hand combat scenes featuring a very beefed-up Rock and Vin Diesel.

As a little extra bonus, you will find not only the new clips for the US market, but also the new trailer for the German market – including some crude dubbing into the German language and there are few things in life more entertaining than hearing Vin Diesel and the Rock yell at people with voices that are clearly not their own – in a foreign language. It is also interesting to see how different the two videos are, with the German trailer offering far less driving action.

So, enough talking…check out the videos below with the first one being the US market trailer and the second being the video intended for the German market.

Click here for more on the first trailer that debuted during the Super Bowl.