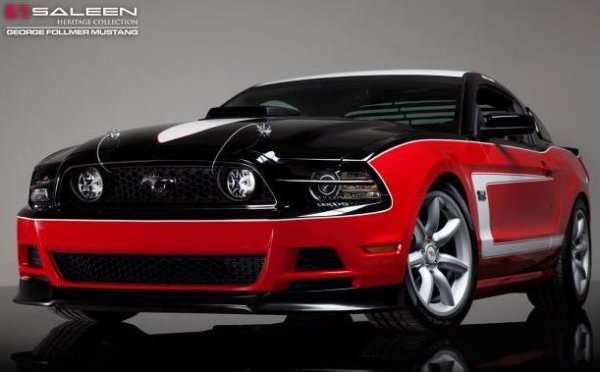 Saleen Automotive has announced their new Heritage Collection Lineup this past weekend and the first member of that new collection is the George Follmer Edition Ford Mustang. Named to commemorate famous racer George Follmer and themed after Follmer’s 1969 Mustang Boss 302 – this new high performance Saleen Mustang brings the racing design to the streets.
Advertisement

The Saleen George Follmer Edition Mustang is based on the 2014 Ford Mustang GT powered by the 5.0L V8 mated to a proper 6-speed manual transmission. Saleen boasts that the GF Edition Mustang will pack around 470 horsepower with the added output from the standard 420 horsepower of the Mustang GT coming by means of a vintage Mustang Boss style cold air scoop that pokes through the hood, a new throttle body, an exhaust system package and a engine calibration that helps the 5.0L make the most of the modifications.

"As a specialty manufacturer and [racecar] driver myself, it is the perfect alignment of passions that allowed us to complete an entire collection of vehicles during today's event", said Steve Saleen, President & CEO of Saleen. "We may actually be the only company that can offer this type of Automotive Collection all under one brand name."

The Saleen George Follmer Edition Mustang wears the distinct black, red and white livery design that was found on Follmer’s 1969 Boss 302 race car complete with the Boss 302 stripe running down both sides of the car – even though this is NOT a modern Boss Mustang. The GF Edition Saleen Mustang also wears an aggressive front fascia, a longer side skirt, a molded rear spoiler and a unique rear fascia that relocates the license plate up between the taillights. Saleen also adds some old school inspired rear window louvers, rear quarter window vents and the Shaker style hood that we mentioned above. The exterior of the George Follmer Saleen Mustang also wears a unique set of silver wheels that are designed after the wheels found on Follmer’s old Mustang race car wrapped in high performance Pirelli rubber.

Inside, the black, red and white design scheme is continued across the heavily leather clad interior with unique front and rear seats sporting the GF logo. The GF logo also appears on the steering wheel center, on the shift knob and in the gauge cluster. The George Follmer Saleen Mustang also features a bunch of goodies that would have been unheard of in those classic race cars like a large touchscreen that controls the advanced infotainment system and a hi-fi sound system. Where the Saleen George Follmer Mustang really shines is in terms of handling performance – just like a proper race car. A Saleen big brake package is tucked behind the unique 19 inch wheels to provide proper stopping power while a race tuned Saleen suspension package allows this Mustang to hit the curves like any Mustang sold in the country. Best of all, while the components of the GF Edition Mustang are designed and tuned for the best possible performance on the race track, Saleen has set everything up so that owners can comfortably drive this rolling piece of Mustang history on public roads without any problem.

The new Saleen George Follmer Edition Ford Mustang is currently available for pre-orders right now with the first deliveries expected to arrive in the fall of this year. The official pricing has not been announced but the company expects that these racer-themed Mustangs will carry an MSRP somewhere in the range of $70,000. The George Follmer Edition Saleen Mustang will eventually be joined in the Saleen Heritage Collection by the Mark Donahue Edition Saleen Camaro and the Swede Savage Edition Barracuda – which will likely be a heavily modified version of the Dodge Challenger.