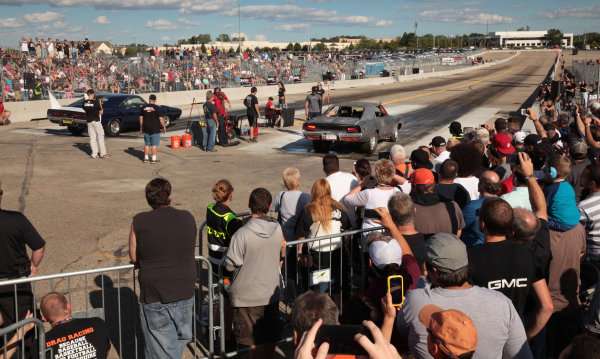 Roadkill Nights by Dodge Stops in Detroit, Kansas City for 2016

After an incredibly one-off event in 2015, the Roadkill Nights by Dodge will add a second event to the schedule for 2016, bringing the same racing action, car show and other Dodge-sponsored high performance fun to both Detroit and Kansas City.
Advertisement

In the summer of 2015, the first Roadkill Nights by Dodge was held in the parking lot of the old Pontiac Silverdome, with a huge collection of race cars, show cars and Dodge branded displays drawing more than 10,000 spectators. I was on hand for that event and it was remarkable. There was drag racing open to all makes and models (not just Dodge products), a huge car show area, interactive Dodge displays and even a ride along area where attendees could go for a ride in the Hellcat Challenger, the Hellcat Charger or the Dodge Viper. Best of all, event entry was free to spectators, show cars and drag cars.

Building on the success of the inaugural event in 2015, Roadkill Nights by Dodge is back for 2016, this time adding a stop in Kansas City, Kansas to the Detroit, Michigan event.

“When more than 10,000 performance enthusiasts flooded the gates at the first ‘Roadkill Nights Powered by Dodge’ event at last year’s Woodward Cruise Week, we promised the event would be back, and it is,” said Tim Kuniskis, Head of Passenger Car Brands — Dodge, SRT, Chrysler and Fiat, FCA — North America. “Even more than a pure enthusiast event filled with drag racing, thrill rides and live music, Roadkill Nights gets people off the streets and onto a track run by professionals, so they can really show how their hot rods perform in a more controlled environment.”

2016 Roadkill Nights by Dodge
The first event of the 2016 Roadkill Nights by Dodge series is set for June 18th at Kansas Speedway in Kansas City, Kansas starting at 1pm and ending at 10pm. This event will include drag racing, a car show area, giveaways, a manufacturer’s midway area, food trucks, live music and, most notably, Dodge thrill rides in the Hellcat Challenger, the Hellcat Charger and the Dodge Viper. Tickets for spectators are free, as are the show car spots, but racers will have to pay $50 each to participate in the drag racing program.

Basically, it sounds like the Kansas City Roadkill Nights by Dodge event will be very similar to the one held in Detroit last year and if that is the case – it will be an awesome event for everyone who attends.

Next, the Roadkill Nights by Dodge series heads to Detroit on August 19th – the night before the 2016 Woodward Dream Cruise. There is no information on the Detroit Roadkill event, but we can expect that it will offer all of the features from the Kansas City event and last year’s Detroit event…if not more.

So, if you live in or around Kansas City or Detroit, mark your calendars for June 18th and August 19th, as this is sure to be the best free high performance car show you will go to this year.

Click here to register for the Kansas City event, or for more details on the 2016 Roadkill Nights by Dodge events!

Elon Musk Says Tesla To Offer Car Insurance in Texas Next Month, But These Challenges Exist
Tesla Co-Found Plans To Build a Battery Factory and Shift The Industry
END_OF_DOCUMENT_TOKEN_TO_BE_REPLACED