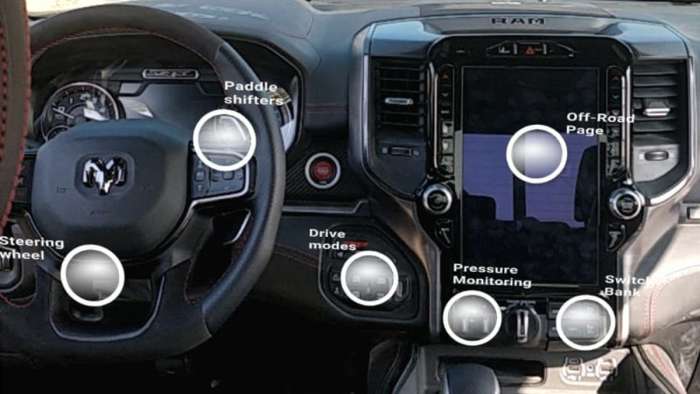 The 2021 Ram 1500 TRX is the first FCA vehicle to showcase the Know & Go mobile app, which walks the owners through the key features and functions of the truck.
Advertisement

The Ram 1500 TRX is one of the hottest American vehicles coming to market for the 2021 model year, due mostly to the fact that it is powered by a 702-horsepower supercharged Hemi. However, the TRX is also the most technologically advanced truck from Ram or any other automaker in America, with a host of new features that haven’t been combined on any competing vehicle. The TRX features a huge infotainment screen with the performance pages and off-road pages, shift paddles, a heads-up display, the drive mode system, the trailer back-up assist system and much more.

In an average modern truck, there are features that some owners will never use because they simply don’t understand them. With the Ram 1500 TRX having so many high tech features, some owners could get lost in the technology and reading through a traditional owner’s manual only helps so much. That is where the Know & Go app comes into play.

“With all of the content on the 2021 Ram 1500 TRX, the Know & Go mobile app highlights the many new features and capabilities our customers will enjoy in a creative, exciting and engaging way,” said Mimi Nguyen, Propulsion Systems Program Manager, Product Development – FCA and co-creator of Know & Go.

Ram TRX Know & Go
The Know & Go app was introduced by a group of FCA employees during the company’s first-ever “Pitch Night” and it is being introduction to consumers on the 2021 Ram 1500 TRX. This program uses augmented reality to walk owners through the various features and functions of the truck.

If you aren’t familiar with augmented reality, it works in conjunction with your smartphone’s camera. It is the same basic system to what Pokemon Go uses to allow gamers to find characters in the real world. The system takes a realistic picture and adds to it. With Pokemon, it adds characters from the game. In the Ram TRX Know & Go app, it adds information about the truck. 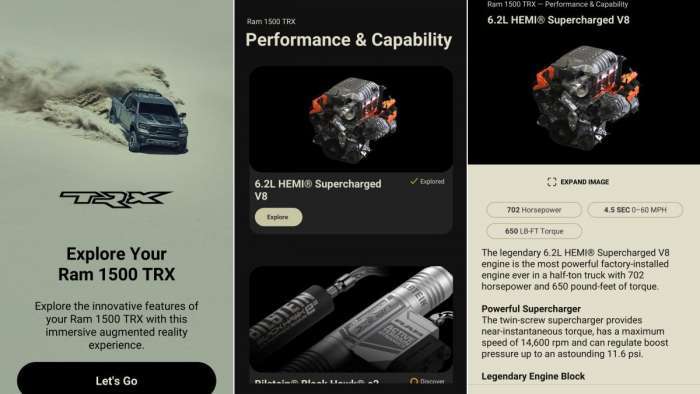 With the app active, you point your camera at an area of the truck and buttons appear on your phone screen. When you tap those buttons on the screen, the app provides details about the feature in question. The image below shows the Know & Go app with the camera pointed at the dashboard. In this image, the system displays buttons for the steering wheel, shift paddles, drive modes, pressure monitoring (trailer brake system), auxiliary switch bank and off-road pages. The person using the app on this phone would then touch one of those buttons on their screen and it will open up to explain that feature.

“We created the Know & Go app as a way for customers to interact with and learn about their vehicles throughout their ownership lifecycle and personal experiences,” said Carolina Harris, Feature Innovation Manager – FCA and co-creator of Know & Go.

The Ram 1500 TRX is the first vehicle to feature this app, but FCA plans to offer it on more vehicles in the future.