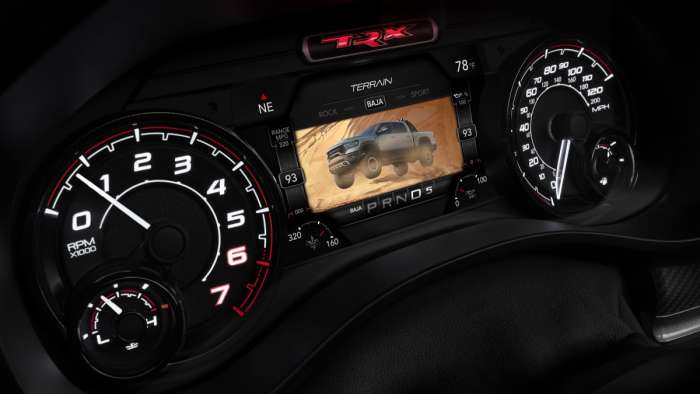 The 2021 Ram 1500 TRX features interior technology that hasn’t been offered before on an FCA vehicle including a heads-up display, a digital rearview mirror and the Trailer Reverse Steer Control system, all of which are likely to travel to other Ram trucks in the near future.
Advertisement

When the 2021 Ram 1500 TRX was introduced, the majority of the coverage focused on the fact that this half-ton pickup is powered by a 702-horsepower supercharged Hemi. The Hellcat name won’t be used for marketing, as Hellcat is a Dodge brand name, but for all intents and purposes, this is the Hellcat Ram that the performance world wanted. It is the most powerful truck ever and the quickest truck ever, running better numbers than the Viper V10-powered Ram SRT10. The old V10 truck still has the top speed title, but the TRX is an off-road truck with off-road tires and a limited speed range.

The 2021 Ram 1500 TRX is guaranteed to be a hit with all of that power, but this is also the most technologically advanced truck ever. There are some high tech features that are already in use in other Ram trucks, such as the adaptive suspension system and the massive 12-inch UConnect infotainment screen, but the TRX introduces several interior components that are sure to be a hit with buyers.

In fact, we expect to see all of these features on other Ram pickups in the future.

Flat-Bottom Steering Wheel
First up, we have the flat-bottom steering wheel of the 2021 Ram 1500 TRX. Like the flat-bottomed wheels in the Dodge Hellcat models and the Jeep Trackhawk, this wheel is wrapped in leather and heated. Buyers can upgrade to a similar wheel with suede and carbon fiber trim, while all of the TRX pickups come with new aluminum shift paddles. These paddles extend above and below the horizontal spokes of the wheel, making it easier to shift when the wheel is turned to extreme angles. 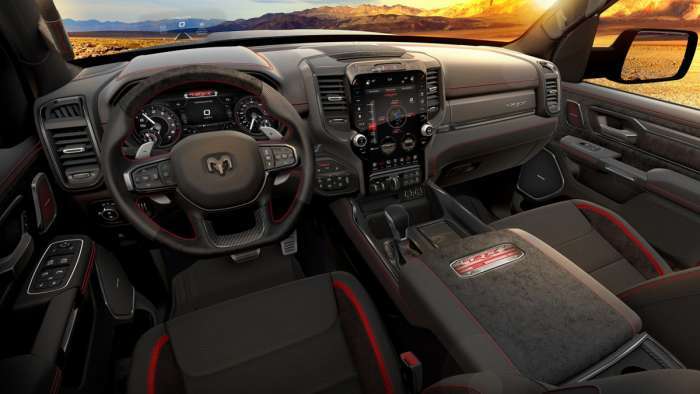 While this wheel is unlikely to be offered in a normal Ram 1500, we wouldn’t be surprised to see some sort of sport interior package in the next few years. More importantly, I would love to see these larger shift paddles included in other high performance models from Dodge and Jeep.

Floor Shift Console
Most Ram 1500 pickups have a shift knob that is situated on the dash but the 2021 TRX has a new floor shifter that is sure to be favored by performance truck fans. Moving the shifter to the floor required a new center console. The designers came up with a unit that offers lots of storage space, along with a wireless charging dock and five USB ports. 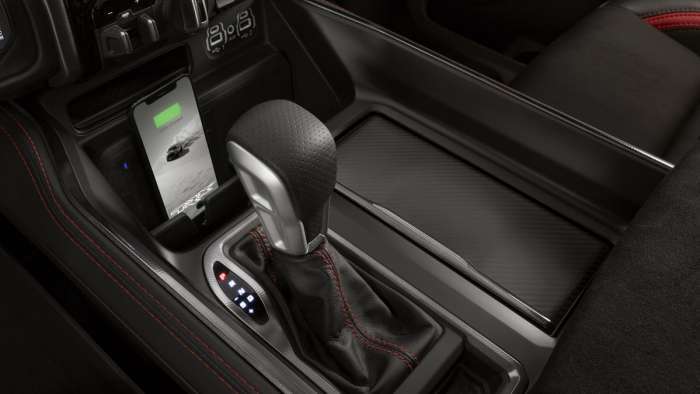 Many truck buyers would prefer a floor shifter over the knob on the dash, so this new console is one that Ram fans would love to see in future models. However, designers love the shift knobs.

Heads-Up Display
The 2021 Ram TRX is the first vehicle from FCA to include a heads-up driver information display. This system shows a variety of content in five different areas. In the included example, the heads-up display system is showing the gear selected, the local speed limit, vehicle speed, the lines for the lane-keep system, the navigation system readout and a message from the hands-free phone system. 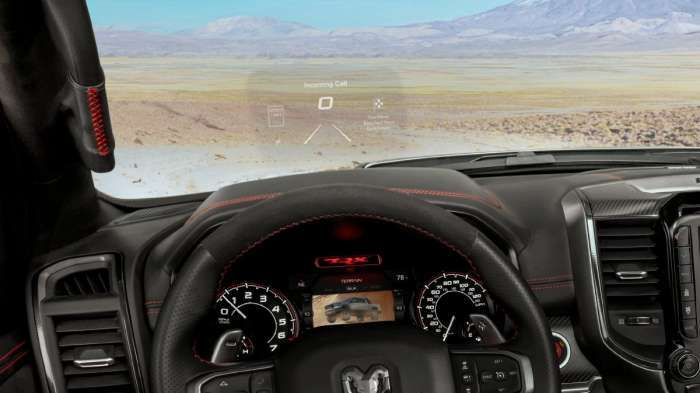 This heads-up display is available in other 2021 Ram models as well.

Digital Rearview Mirror
The Ram 1500 TRX comes with a new digital rearview camera system that displays on a 9.2-inch wide monitor that is mounted in place of the traditional rearview mirror. This system uses a camera mounted on the back of the vehicle to give the driver a better look at what is going on behind him. While this system is new to the Ram lineup, I have used it in vehicles from other automakers and it is a great feature. It provides a much clearer view than a traditional mirror. There is no obstruction from the rear headrests, passengers or the edges of the rear window. You also have a wider field of vision with the camera system than with a reflective mirror, so it is better in every way. 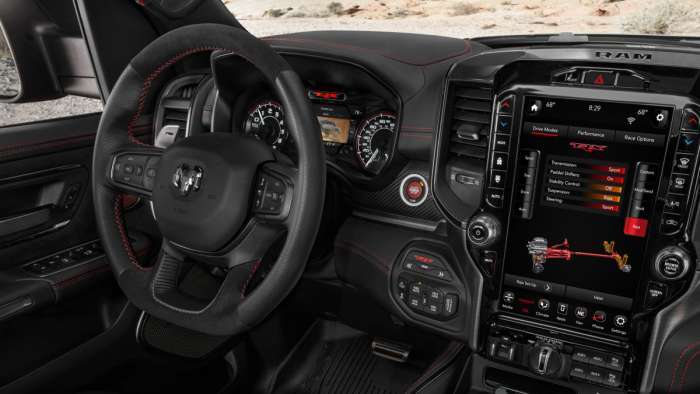 Trailer Reverse Steer Control
Finally, the 2021 Ram 1500 TRX introduces the brand’s new Trailer Reverse Steer Control system. This system uses a knob on the dash to direct the trailer in the video monitor. The driver doesn’t touch the steering wheel – the system steers the truck as needed to put the trailer where the driver is aiming. This is a great system for those folks who struggle with the reverse control of a trailer. 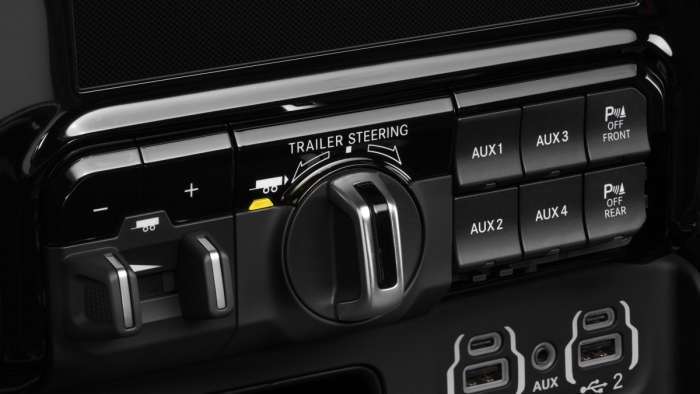 Ford was the first to offer this system, but that system has some setup steps. You have to put special stickers on your trailer, then you have to input a series of measurements of the distance between the truck and trailer. I have used this system with one of my horse trailers and it worked very nicely. The only downside to that setup effort is that I have a half dozen different trailers and each requires stickers and measurements. The Ram system doesn’t require any stickers on the trailer or any measurements, so it sounds like it will be easier to use with multiple trailers. 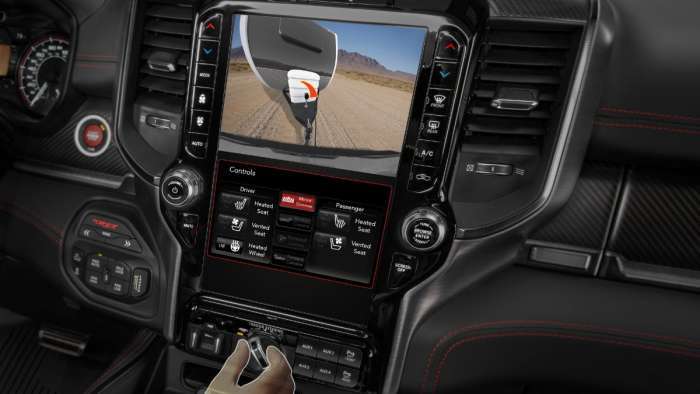 This is one more feature that is available on 2021 Ram trucks aside from the TRX.

LG's New EV Battery Plant Is a Welcome News for Tesla
Tesla Giga Berlin's New Hurdle: It's Not Only the Gov't, but Now Tesla Itself
END_OF_DOCUMENT_TOKEN_TO_BE_REPLACED