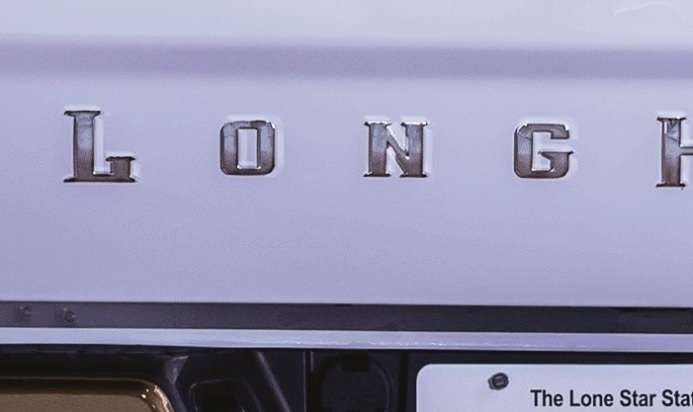 The Ram Trucks brand has issued a teaser picture of a new model which will make its debut during the 2017 Texas State Fair with the promise of “a decidedly Lone Star flavor” and a logo which pretty clearly says “Longhorn”.
Advertisement

The state of Texas is one of the single biggest truck markets in the US, leading automakers to create special models for Texas and about Texas, and at the 2017 Texas State Fair, Ram will introduce an unknown number of new models with “a decidedly Lone Star flavor”. The company also issued the image above of a close-up of what appears to be the bottom of the tailgate and the top of the rear bumper, with chrome letters which likely spell out Longhorn – seemingly forecasting a new Ram Longhorn model of some sort.

A New Ram Longhorn?
The image above almost certainly reads “Longhorn”, although we can only see “LONG” and part of the H. Longhorns are an obvious icon of Texas, so perhaps Ram plans to introduce some sort of refreshed Longhorn package with extra emphasis on the Texas connection.

Right now, if you look on RamTrucks.com in the Build & Price section, the Ram 1500 is offered in with the Lone Star Silver trim and the premium Laramie Longhorn trim, while the Ram 2500 and Ram 3500 both feature the Lone Star trim and the Laramie Longhorn trim. Perhaps one or more of these current trimlines will be refreshed for the 2018 model year, with an unveiling planned for the Texas State Fair.

Considering that the image above appears to have prominent chrome badging, I would guess that this new Longhorn will be some sort of premium trim, but with the promise of more than one new model being introduced at the fair, it is unclear how many models will be introduced or what else might join the new Longhorn in the teaser image above.

The 2017 Texas State Fair opens on Friday, September 29th, so we should know within the next few days what the folks at Ram have planned in terms of these mysterious new models.