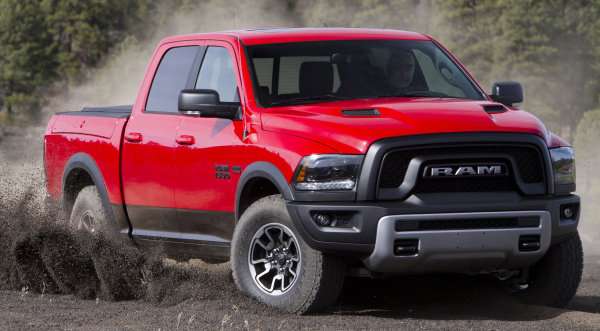 The Ram Rebel has been announced as Four Wheeler Magazine’s Truck of the Year, beating out the Chevy Colorado Z71 Diesel, the Nissan Titan XD PRO-4X Diesel and the Toyota Tacoma TRD Off-Road in one of the most grueling truck competitions in the industry.
Advertisement

The Ram 1500 Rebel is the most off road capable half ton truck ever offered up by the Chrysler Group, thanks mostly to the company’s adjustable air suspension setup paired with Bilstein dampers and Toyo Open Country tires. However, when the Ram Rebel entered Four Wheeler Magazine’s Truck of the Year competition, the Ram had some very serious competition from trucks that have been piling up awards over the past year –including the Chevrolet Colorado Z71 with the 4-cylinder turbo diesel, the Nissan Titan XD PRO-4X with the new 5.0L V8 turbodiesel and the new Toyota Tacoma TRD Off-Road with the 3.5L V6.

Both the Colorado and the Titan have taken home major awards, but the Four Wheeler Truck of the Year program puts these trucks through far more rigorous tests while in the hands of drivers who know off-roading best. In the end, the Ram Rebel topped the hot new midsized trucks and the new Nissan with the Cummins V8.

Four Wheeler Magazine Truck of the Year
The Four Wheeler Magazine Truck of the Year award includes an extensive off-road portion, but the judges also spend time with these trucks at a race track and on the open road. The goal is to find a truck that is not just the best when off-roading, but rather the off-roading truck that is the best overall. The criteria includes driving performance, “survivability”, interior quality, build quality and, of course, the ability to performance in the most difficult off-road situations.

The Four Wheeler judges spent 5 days with the Ram Rebel, the Nissan Titan, the Chevy Colorado and the Toyota Tacoma, racking up more than a thousand miles on each vehicle during the process and when they were done punishing these four new trucks – the Ram Rebel stood out as the king of the hill. You can read all about the competition in full detail over at the Four Wheeler website.

In picking the Ram Rebel as the best of their test, the Four Wheeler Magazine folks praised the 5.7L Hemi engine, the adjustable air suspension with Bilstein shocks and the choice in tires; while their only complaints were the lack of a locking rear differential and the tread pattern on the seats. With the other trucks, the judges weren’t happy with the lack of power or a low seating position, so there is really little question why – in this group – the Ram Rebel proved to be the best from a publication that focuses on hardcore trucking.

“The Ram Rebel offers an aggressive off-road-style package on our successful Ram 1500 platform and this award from Four Wheeler magazine endorses its combination of engineering and design,” said Bob Hegbloom, Head of Ram Brand, FCA - North America. “We’re pleased this opinion-leading off-road enthusiast publication recognizes the Rebel as its Pickup Truck of the Year.”