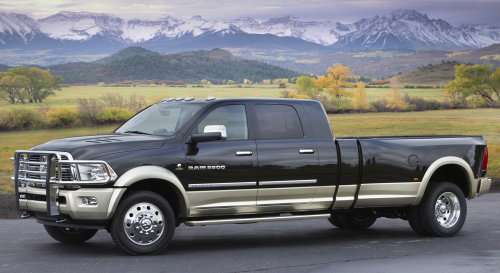 When attendees rolled into Churchill Downs in Kentucky this weekend to watch Animal Kingdom win the 137th Kentucky Derby, they were greeted by a huge array of Ram brand trucks and displays – including the grande debut of the Ram Long Hauler Concept.
Advertisement

While the weather for the weekend of the 137th running of the Kentucky Derby was expected to be rainy, it ended up being a beautiful day for racing and in the end, an Amazing stretch run by Animal Kingdom brought home the Kentucky Derby win for jockey John Velazquez and trainer H. Graham Motion.

Chrysler’s Ram Truck brand was the official sponsor of the 2011 Kentucky Derby, with the Ram font logo emblazoned on the legs of the majority of the jockeys in the field, as well as on the jackets of the on-track officials and displays throughout the grounds. The various Ram displays and the Ram Backcountry VIP lounge gave fans, officials, owners and jockeys a chance to check out the best and brightest from the popular truck-only brand and the on-track branding helped to promote the Ram brand to the millions of spectators watching around the nation. This also gave the company a chance to show off the Ram Long Hauler Concept to a crowd who is likely to need this type of truck.
The Ram Long Hauler Concept begins with a Class 5 Ram 5500 Crew Cab chassis which was then equipped with an 8’ bed – making for a truck that is a whopping 24’ long with a 197.4” wheelbase. Of course, to do a job like this, Ram calls upon the efforts of the 6.7L Cummins Turbo Diesel engine churning out 350hp and 800lb-ft of torque sent to all four wheels via a six-speed Aisin automtatic transmission.

The folks at Ram began on the outside, adding an hitch-access tailgate for easier mounting of a “fifth wheel” trailer and a massive auxiliary fuel tank in the bed. Combined with the large under-truck fuel tank, the Ram Long Hauler holds 170 gallons of diesel fuel and assuming a very conservative estimate of 10mpg while towing a large, loaded horse trailer the Ram Long Hauler could travel from Detroit to Churchill Downs and back - twice - without stopping for fuel.

Inside, the Ram engineers didn’t spare any effort, modifying the rear seating area of the mega cab design to accommodate a small fold-down sleeping area and filling the interior with the same high-level, western themed amenities included in the luxurious Ram Laramie Longhorn Edition. This includes plush dark brown leather with light, contrasting stitching and soft-touch finishes on the door panels and dash pad. The center stack features a huge touchscreen infotainment system with tons of storage space in the center console – including space for a laptop and a small safe.

The Ram Long Hauler is only a concept right now but Chrysler is touring the massive super truck to events around the country where it will be viewed by those most likely to invest in this type of truck. The automaker aims to target those who participate in equestrian and other rodeo/ranching events, race car teams, professional car hauling companies, and recreational vehicle owners.

Check out the gallery below for a closer look at the gigantic Ram Long Hauler Concept and a big congrats from everyone at TorqueNews.com to Animal Kingdom and John Velazquez for winning the 137th Kentucky Derby.

Elon Musk Says LFP Battery Cost Is "Closer To Nickel," But Has Other Advantages
Tesla Giga Berlin Is 20% Completed Due To Astonishing Speed
END_OF_DOCUMENT_TOKEN_TO_BE_REPLACED