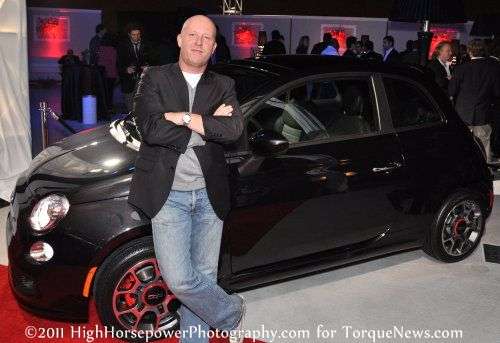 The numbers are in for April 2011 sales and for the second month in a row, the Chrysler Group showed strong growth compared to the same month a year ago with the exception being the Chrysler brand – one of just four major brands in the US to show a decline in sales growth.
Advertisement

Since Fiat hasn’t offered sold in the US in decades, there is no growth rate for the Fiat brand as it is reintroduced to the US market. In March, the first 500 new Fiat 500s hit the streets and in April, Fiat followed that up with 882 500s sold. Fiat hopes to obtain cult status, competing with compacts like the Mini lineup but even though Mini offers more models, Fiat has a long climb ahead of them as the BMW-controlled Mini brand moved almost 6,500 units last month. The Fiat 500 is pictured on the right with Stefan Richter of Bravo’s Top Chef, taken at the Motor Village grand opening before the 2010 LA Auto Show.

The top dog from the Chrysler Group in terms of growth rate was the Jeep brand with 32,384 SUVs giving the Trail Rated crew an increase of 64.9% over April 2010. The leader from Jeep in both sales volume and growth rate was the 2011 Grand Cherokee, with 9,802 units giving the model a 189% increase over last year. The Wrangler was second in sales with 9,051 units sold (up 9%) and the second in terms of growth was the new Jeep Compass with 4,050 vehicles accounting for a 181% improvement.

Next in terms of growth for the Chrysler Group was their Ram brand – formerly known as Dodge trucks. The Ram and Dakota are the only models offered from the Ram Brand until the Ram C/V (based on the Dodge Grand Caravan) hits the market later this year. The Dakota was the winner from the brand in terms of growth with an improvement of 33% over last year coming from the 1,580 trucks sold and with 17,680 trucks sold (+29%), the Ram lineup was the top selling model from the brand that shares its name. The Dakota is slated for an end after this year and Ram is expected to launch a new truck, smaller than the Ram lineup that will hopefully spur small truck sales within the brand.

The Dodge brand was the third best in terms of growth (up 14.2%) but with 44,320 cars, minivans and SUVs sold, it was the top performer in terms of vehicles sold. The Caravan lineup was the top of the heap in terms of units sold with 8,793 new minivans hitting the streets last month, followed by the redesigned Dodge Charger (8,485 vehicles sold) and the refreshed Dodge Avenger (7,577 sold). The Caravan and Charger are frequently atop the sales list for Chrysler but Dodge looks to be benefitting from the subtle changes made to the new Avenger – and the new engine option. The top model in terms of growth last month was the new 2011 Dodge Durango, as 5,064 SUVs compared to just 2 sold last year, gives the Durango an improvement of 253,100%...that is certainly a promising number for Chrysler. The other top performers in terms of growth were the Dodge Nitro with 2,209 SUVs bringing a 44% jump over last April and the Avenger, which came up 26%.

The Chrysler brand was one of just four brands in the US market to show a decline in growth from April 2010 to April 2011; with every model in the lineup showing a decline. The strongest vehicle in terms of sales was the new 2011 Chrysler 200, with 8,274 units sold last month. There was no 200 sold last year but if you compare the sales numbers of the 200 to the Chrysler Sebring that it is replacing, the 200 outsold last year’s Sebring by almost 2 to 1. The top model in terms of sales was the Town & Country minivan lineup, with 8,842 units sold and the Chrysler 300 sedan was next in line with 3,263 full sized sedans hitting the streets last month.

As Chrysler continues to get new and refreshed models (like the Chrysler 300) out to dealerships around the country, we can expect to see things continue to improve but it will be interesting to see just how much the 2011 models help grow sales for the Chrysler brand through this calendar year.

Panasonic Updates Profit Forecast, Noting How Much Tesla Batteries Help The Jump
2022 Porsche 911 GT3 Laps Nurburgring in 7:04 With Journalist Behind The Wheel
END_OF_DOCUMENT_TOKEN_TO_BE_REPLACED