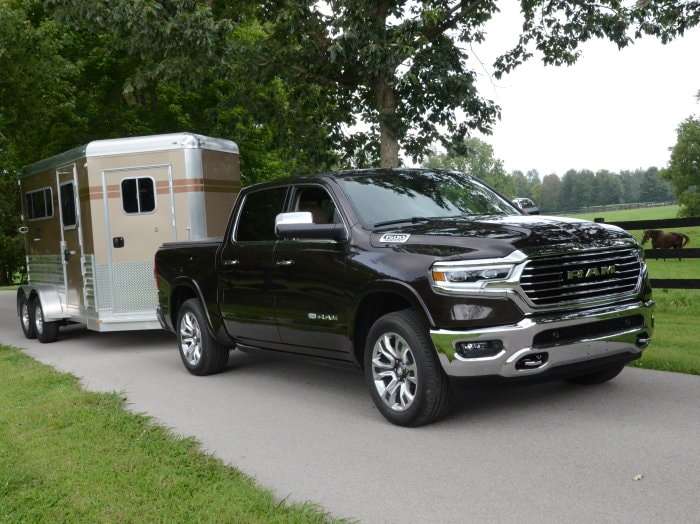 Ram 1500 Hybrid Gains 2-3mpg around Town and Combined, 1mpg on the Highway

FCA has announced the official EPA fuel economy numbers for the 2019 Ram 1500 models with the eTorque mild hybrid system and both engines pick up 2 to 3 miles per gallon in the city and combined while also improving by 1 mile per gallon on the highway and making for a smooth drive.
Advertisement

The Ram eTorque system is a great hybrid package, as it improves fuel economy and makes for smoother upshifts, downshifts and initial acceleration (especially when towing) without any real downsides. Both the V6- and Hemi-powered Ram 1500 pickups with the hybrid system can be driven hard and they feel very much like the non-hybrid models, but when driven more gently, the hybrid system makes for a much smoother driver. The system provides electric power whenever torque output from the engine is at its lowest, including during shifts, so the “bump” that is generally felt when the truck shifts are smoothed out.

Also, when pulling out from a stop with a 5,000-pound horse trailer, the initial torque provided by the eTorque system makes for smoother acceleration and that is great when you are towing live animals. At the same time, if someone who didn’t know that it was a hybrid drove one of these trucks, they would almost certainly have no idea that it was a hybrid-powered pickup, especially when we are talking about the Hemi engine.

However, when it comes to hybrid discussions, the key figure is fuel economy and that regard, the 2019 Ram eTorque system doesn’t disappoint.

2019 Ram 1500 Pentastar V6
First up, we have the eTorque system mated to the 3.6-liter Pentastar V6. While the V6 package is a late availability option, the hybrid system is standard with the V6. In other words, the Ram 1500 V6 only comes as a hybrid, so we have to compare the fuel economy numbers to the 2018 Ram 1500 Classic with the non-hybrid V6.

2019 Ram 1500 Hemi eTorque
The 2019 Ram 1500 with the Hemi is offered with and without eTorque, so we have more accurate comparison between the two numbers.

Those improvements are the same for the 2019 Ram Hemi hybrid with the four-wheel-drive, with the 4x4 getting the same 17mpg in the city and the same 19mpg combined as the rear-drive trucks, but on the highway, the hybrid package gets 22mpg while then non-hybrid gets 21mpg.

These aren’t gigantic numbers, but when you combine the long-term benefits at the pump with the improved drivability – especially if you are towing livestock – the eTorque system is a great feature of the Ram 1500 lineup.

DeanMcManis wrote on September 6, 2018 - 4:18pm Permalink
As you say it's a nice MPG bump. I only wonder why they don't team up the hybrid drivetrain with the eco-diesel engine, which was already getting 21 city/29Hwy for the RWD Ram. Sure the diesel engine doesn't need the torque boost the way that the gas V6 does, but the combination of the thrifty diesel engine and the hybrid drivetrain should have attained the top MPG numbers in their class.