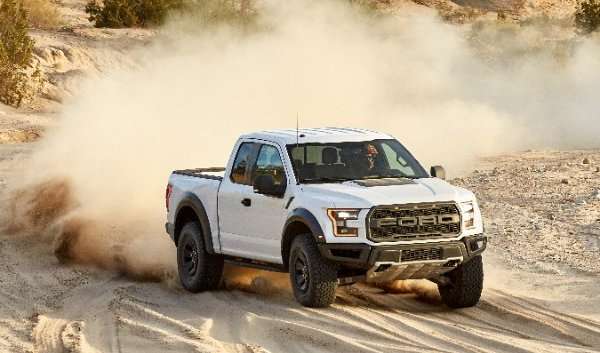 While leaked dealership information suggested that the 2017 Ford Raptor F150 would have 450 horsepower and 510lb-ft of torque, the Motor Company announced the official specs this morning and as expected, those figures of 450 and 510 are accurate – making the new Raptor the most powerful F150 ever.
Advertisement

Last week, the enthusiasts at FordRaptorForum.com were discussing some leaked dealership information from the 2017 Ford Raptor F150. According to their information, the Raptor would pack 450 horsepower and 510lb-ft of torque and this morning, Ford Motor Company confirmed those numbers to be accurate. This doesn’t come as a huge surprise, after the numbers leaked last week and after a Ford exec commented that the Raptor would have 450 horsepower last January. However, we know now that these numbers are official, and they will make the new F150 Raptor a real monster on the road and off.

“Raptor was designed to be a no-compromise, off-road performance machine,” said Matt Tranter, Ford Performance engineering supervisor. “That is why we made the switch from the cast-iron V8 to the aluminum block, high-output GTDI V6 EcoBoost engine that our team tuned to add 39 horsepower and 76 lb.-ft. of torque for today’s Raptor.”

2017 Ford Raptor F150 Powertrain
The 2017 Ford F150 Raptor is powered by a specially tuned version of Ford’s 3.5L EcoBoost V6. This engine delivers 450 horsepower and 510lb-ft of torque thanks to a host of changes over the “regular” 3.5L EcoBoost, including a new twin direct injection system, a lighter crankshaft, a redesigned twin turbocharged setup with an electronic waste gate, a lightweight valvetrain setup and a new variable-displacement oil pump. These components make the Raptor V6 engine stronger and more powerful than the similar engines in the non-Raptor F150, but more importantly – the new Raptor is considerably more powerful than the previous V8-powered SVT Raptor.

The 2014 Raptor F150 with the SVT 6.2L V8 offered 411 horsepower and 434lb-ft of torque, so the new 2017 Raptor packs 39 more horsepower and 76lb-ft of torque. Also, with the new Raptor weighing around 500lbs less than the previous version, the new high performance F150 pickup will have a far better power to weight ratio – so it should perform better in every situation.

Finally, that power will be sent to the off-road ready tires of the new Raptor F150 via an advanced four wheel drive system and an all-new 10-speed automatic transmission. This drivetrain setup will make the new Raptor nearly unstoppable, but it will also allow the new Raptor to be 23% more fuel efficient than the previous model. The 2014 Raptor with the 6.2L V8 offered 13mpg combined, so the new Raptor should be right around 16mpg combined. That isn’t a fantastic number, but the odds are very good that most people buying this new Raptor won’t be too concerned with fuel economy.

So, the bottom line is that with 450 horsepower and 510lb-ft of torque, the 2017 Ford F150 Raptor is the most powerful production half ton truck ever offered for road use – and I cannot wait to see these monsters on the street. In the meantime, check out the newest Ford video of the Raptor F150 in action below!

vbondjr1 wrote on October 17, 2016 - 7:18pm Permalink
I guess, in a way, that's cool I mean 450hp and 510lb-ft of torque is nothing to sneeze at. I'm not to fond of Non-V8 engines but I might not be too upset if a slightly tweaked version (read: 475hp/535lb ft torque) version of that ends up in the 2018 Mustang GT with a 375hp/395lb ft 2.3L Ecoboost goes right up under that and the 325hp/380hp 2.7L Ecoboost V6 goes as the base car. I mean those three cars right there with 10-speed auto and 7-speed DCT options would work out very well IMO. The only problem is getting them to sound good. It would need to be smooth, deep and throaty without drone. Also the cars would need to have a "track-pack" option that featured the GT350 suspension and rear assembly and Brembo brakes without the carbon fiber rotors. Honestly if Ford did that with the Mustang, Explorer, Bronco, Ranger & Fusion they'd knock everyone else on their butts. You have Economy and performance all right there in a coupe, sedan, a street SUV, an off road/street SUV, a small truck and a regular truck. And of course we all know that FRPP is going to come out with upgrades anyway so if Ford is going to go balls-out with the Ecoboost, this would be the way to do it IMO. Just saying