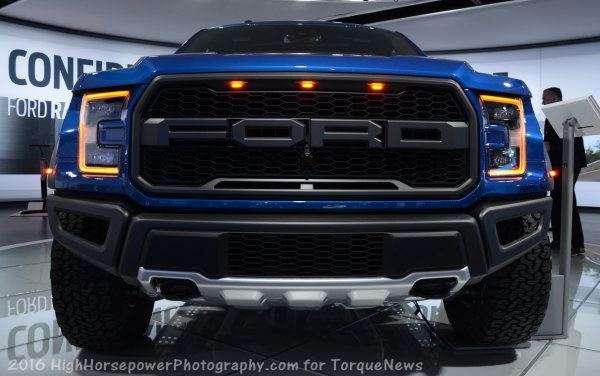 Ford Motor Company hasn’t announced the official power figures for the 2017 F150 Raptor, but according to information posted on a Ford Raptor enthusiast forum, the new high performance pickup will pack 450 horsepower and 510lb-ft of twin turbocharged torque – more than enough power to make this new Raptor the high performance sport truck we have been dreaming of.
Advertisement

Although Ford has been showing off the new F150 Raptor for more than a year now, the automaker still hasn’t announced the exact power figures for the 3.5L EcoBoost V6 which will be the standard powertrain. However, someone from FordRaptorForum.com stumbled across some information in the dealership computer system that appears to be fairly official, including the power numbers for the 2017 Raptor F150.

The one hint that Ford has given us on 2017 F150 Raptor performance numbers is that the new 3.5L EcoBoost would offer more power than the 6.2L V8 which powered the last Raptor. That V8 delivered 411 horsepower and 434lb-ft of torque, and according to the information on the enthusiast forum, the 2017 Raptor is going to pack way more horsepower and torque than the old high performance F150.

If those numbers prove to be accurate, the 2017 Raptor will have 39 more horsepower and 76lb-ft of torque than the heavier 2014 Raptor F150. Also, the new Raptor will have the 10-speed automatic transmission, so when the steeper gearing of the new transmission and the lighter architecture of the new generation, aluminum bodied F150 work with the 450hp EcoBoost V6, the new Raptor should be considerably quicker than the previous SVT F150.

We already know that the high tech four wheel drive system, the Fox suspension setup and the new tires will make the 2017 F150 Raptor the most off-road capable production road truck ever, these power figures will make it the most powerful F150 ever. Shy of the old Ram 1500 SRT10 with Viper power, this new Raptor could be the best performing American production truck ever – on the road or off.

Honestly, while I understand that the new Raptor is made to shine in the worst conditions, I cannot wait to see what the 2017 Ford F150 Raptor will do on a quarter mile drag strip. With the gearing of the 10-speed automatic, the lightweight body and this powerful twin turbocharged engine, the new Raptor should be capable of impressive quarter mile times.

Nicholas Fortuso wrote on September 22, 2016 - 2:45pm Permalink
I've been in the automotive trade for fifty years
Bwahahah wrote on September 28, 2016 - 11:51pm Permalink
No, you haven't.
John wrote on September 23, 2016 - 11:36am Permalink
Hello, so i am on the market for a new truck and i know i want the Raptor but i aways hear how you should never buy a first year model of a car. Should i wait for the 2018 model or do you think they have most o the "problems" figured out with the 15-16 F-150? when it comes to the new engine and transmission? Thanks