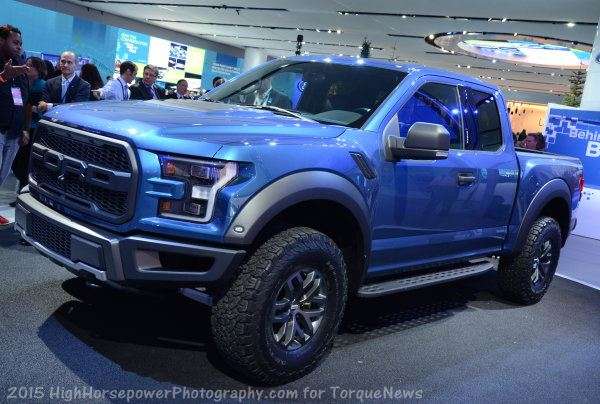 When the 2017 Ford SVT Raptor F150 was introduced at the Detroit Auto Show, it was promised that it would have more power than outgoing models and this past weekend, Ford VP of Global Product Development Raj Nair mentioned in a TV interview at the Rolex 24 that the new Raptor would pack 450 horsepower.
Advertisement

The 2017 Ford SVT Raptor F150 that was introduced at the 2015 North American International Auto Show in Detroit’s Cobo Hall, it was pretty much what we all expected. If you took the styling cues of the previous Raptor and applied them to the 2015 F150, the result would be the mean looking sport truck that debuted two weeks ago. However, we were all surprised to learn that the 2017 Raptor F150 would be powered by a specially tuned version of the 3.5L EcoBoost V6 and while exact numbers weren’t announced, it was promised that the newest SVT F150 would have more power with the twin turbo V6 than the previous version’s naturally aspired V8.

There has still been no official release announcing the engine specs for the 2017 Raptor F150, but thanks to a comment by Ford’s Raj Nair, we know that the new Raptor will have 450 horsepower.

Nair Speaks on the Raptor
This past weekend, the Ford EcoBoost Daytona Prototype won the 2015 Rolex 24 at Daytona International Speedway and Ford’s Vice President of Global Product Development, Raj Nair, was on hand for the 24 hour long race. Nair was also interviewed by Fox Sports during the race and it was within the context of this interview where Nair stated that the 2017 Raptor would have 450 horsepower. That adds one more very important piece to the 2017 Raptor puzzle, and now that we know the horsepower number, all which is left to question is the torque output.

How Much Torque?
The 3.5L EcoBoost V6 that will power the 2017 Raptor F150 has been used in a long list of other vehicles, with the most recent being the 2015 F150 and the 2015 Lincoln Navigator. The F150’s version of the twin turbo V6 offers 365 horsepower and 420lb-ft of torque while the Lincoln packs 380 horsepower and 460lb-ft of torque. If the SVT version of the 3.5L EcoBoost V6 offers 450 horsepower – 70 more than the most powerful current application of this engine – I would expect that it would also see a significant bump in torque. I would say that it isn’t out of the realm of possibility for the next gen Raptor F150 packing 500lb-ft of torque to go with all of that horsepower.

Big Performance with Big Power
While it sounds like the 2017 Ford SVT Raptor F150 will offer some serious power figures, this new model is more than just bigger power. That power will make a difference, but when you factor in the new 10 speed automatic transmission, the new advanced four wheel drive system and the lightweight aluminum body – the 2017 Raptor should run circles around the previous generation Raptor.

In other words – the 2017 Raptor F150 should be one beast of an off-road performance truck, and I cannot wait to experience it for myself. Unfortunately, we will be waiting for quite a while, with the new Raptor coming for the 2017 model year – but it should be well worth the wait.

Thunderbuck wrote on February 21, 2015 - 4:33am Permalink
The Raptor is getting a new-gen performance EcoBoost 3.5. It has more in common with the engine in the new GT than with the current EB 3.5.
Steve wrote on March 20, 2015 - 11:02am Permalink
I want one ! I have a 2011 Raptor and it is a beast with the exhaust and cold air induction, so I cannot hardly stand that I will have to wait this long. Already told my salesman I want to be 1st buyer in area. I have had some really nice Ford trucks but I can't see owning anything but another Raptor, comfortable and reliable, what more could one ask for?