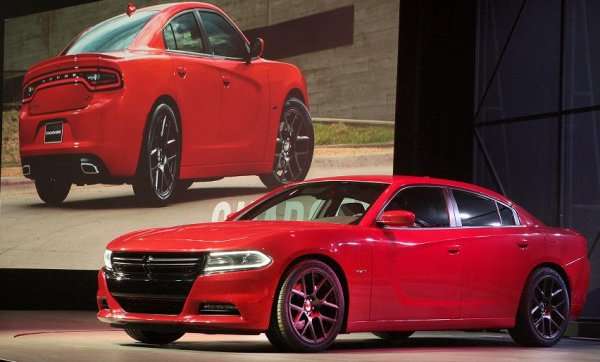 While the introduction of the new 2015 Dodge Charger R/T at the 2014 New York Auto Show focused on the striking new exterior design, but what went unmentioned in many reports on the facelifted Charger (including ours) is that 2015 Charger buyers cannot order the 5.7L Hemi with the advanced all wheel drive system after the option proved to be fairly unpopular in the current models.
Advertisement

The Dodge Charger really doesn’t have much competition in the US market as there are very few large rear wheel drive sedans with both economy-minded V6 engines and performance minded V8 engines, but one of the features of the 2014 Charger that made it so popular to some prospective buyers was the ability to get the powerful 5.7L Hemi with an advanced all wheel drive system.

Realistically, very few large sedans that arent high dollar Mercedes or BMW models offer solid rear wheel drive performance so those buyers who want to go fast with a rear drive large sedan on a budget likely found the Charger R/T to be the best choice for the price. Those Charger R/T buyers who wanted to be able to drive their high performance sport sedan year round in snowy areas were also able to opt for an advanced all wheel drive system that featured a front axle disconnect system that allowed the Hemi powered Charger to get better highway fuel economy when you really don’t need power to all four wheels.

The 2015 Dodge Charger will still be offered with all wheel drive, but only when the car is equipped to the Pentastar V6 engine. The 2015 Charger R/T that is on display right now at the ongoing New York International Auto Show is powered by the new 8-speed automatic transmission and the same 5.7L Hemi V8, but it doesn’t have all wheel drive and it looks like none of the refreshed 2015 Charger R/T models will have the surefootedness of the advanced all wheel drive system. That’s right – no more all wheel drive Hemi Chargers in 2015.

This has some Mopar lovers in an uproar, but according to the folks at Allpar – the people buying the Dodge Charger are the ones who were essentially responsible for the demise of the Hemi/all wheel drive combination.

While speaking with former Dodge brand CEO Ralph Gilles, the current SRT boss explained that they killed off the AWD/Hemi configuration because the take rate was very poor. His reasoning behind people preferring the rear wheel drive Hemi powered Charger R/T is that “most V8 lovers like a good powerslide once in a while” and I think that he is right. I have had the pleasure of driving the current (2014) Charger R/T in both rear wheel drive and all wheel drive form and while I can appreciate the increased traction capabilities of the advanced all wheel drive package, I would much rather have the increased wheel horsepower and the ability to do a huge, smokey burnout when the mood strikes.

There is the chance that the outcry from the consumer market over the removal of the all wheel drive option with the 2015 Dodge Charger R/T could encourage the Chrysler Group to offer it with future models – but the low take rate of that feature is likely to keep it out of the lineup for some time. If nothing else, those prospective Charger owners who absolutely must have all wheel drive can still pick the Pentastar powered 2015 Chargers with 292 horsepower and better fuel economy than the Charger R/T.