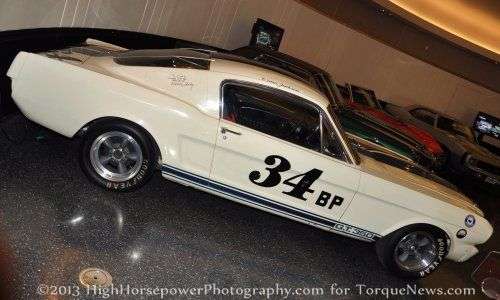 It was initially rumored that the current Shelby GT500 package would be discontinued after the 2014 model year – taking the monster supercharged V8 with it - and in its place would be the new SVT Cobra that would offer big power from a naturally aspirated V8. However, a new report from Road & Track suggests that the Shelby name will continue on but rather than GT500, the highest performance factory Mustang will be called the Shelby GT350.

When the Shelby name first graced the young Ford Mustang back in 1965, the GT350 designation was the title of choice and while the GT500 was introduced in 1967, the GT350 served as the “base” Shelby Mustang throughout the early run of the Shelby models that ended with the 1970 model year. The power figures of the GT350 varied over those first six model years but when the GT350 was introduced for the 1965 model year Mustang, it offered 306 horsepower from a 289 cubic inch V8 where the most powerful Mustang GT offered “only” 271 horsepower. The image above on the right shows an original Shelby GT350 race car, now owned by Craig Jackson of the Barrett Jackson Auto Auctions.

When the new Shelby GT350 Mustang is unveiled, it will likely be labeled as a 2016 model year vehicle with a later production date than the 2015 Mustang GT that will make its debut next April at the New York International Auto Show. It is speculated that the 2016 Shelby GT350 Mustang could debut in concept form alongside the rest of the next generation Mustangs in the Big Apple but they will still likely have a late availability to give the new Mustang GT some time to serve as the King of the Mustang Mountain.

Also like the original Shelby GT350 back in 1965, it is expected that the 2016 GT350 will be powered by a naturally aspirated V8 – most likely an enlarged version of the current 5.0L V8 used in the Mustang GT and the Boss 302. While the modern GT350 will surely offer more power than the 450-475 expected from the 2015 Mustang GT, Ford may take a step away from the 662 horsepower currently offered by the Shelby GT500. We can still expect big power – just not 662 big. Should the 2015 Mustang GT have 450 horsepower, I would guess that the Shelby model would pack somewhere in the area of 500-525 horsepower but again, that is just my guess. That is surely bad news to horsepower junkies but with that decrease in power may also come a decrease in price. Ford may have a hard time charging the same $60k ballpark for a 500 horsepower car as they do a 662 horsepower car so a new, lower price may also help the company to sell more copies of the next generation super-Stang.

The 2016 Ford Shelby GT350 Mustang may follow a similar path to that of the now-discontinued Mustang Boss 302 with a moderate increase in power along with a long list of unique features to help it perform in ways other than just brute horsepower. The Boss 302 offered only a slight increase in power and while we would expect the GT350 to have a larger advantage over the standard Mustang GT – the special body components, enlarged brakes, a beefed up suspension system and a revised interior could be the rest of package for this new GT350.