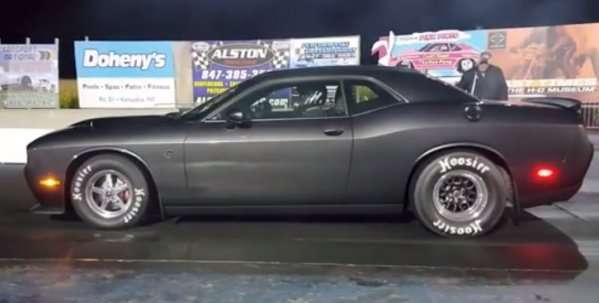 While the vast majority of the Dodge Challenger SRT Hellcats setting records on the drag strip are equipped with the 8-speed automatic transmission, a new manual transmission Challenger owner has raised the bar for those Hellcat racers with a clutch pedal – laying down an awesome 10.25 run at 140 miles per hour.
Advertisement

Back in April, we brought you the news of the quickest Dodge Challenger SRT Hellcat in the world, which had run 10.62 with Jon Sipple at the wheel. Sipple was the first manual Hellcat Challenger in the tens and his initial record of 10.86 back in February gave him 8 months atop the list of the world’s quickest Hellcat Challengers with a clutch pedal.

This past weekend, the manual transmission Hellcat Challenger owned and raced by Bill Gamble shattered Sipple’s record – running a 10.25 at 140 miles per hour.

Bill Gamble’s Record Setting Hellcat Challenger
As is the case any time a record is claimed, I ask the owner/driver for a modification list and some proof of the run. While Bill Gamble didn’t want to explain all of the fine details of his car, since he doesn’t want someone else copying his build during the late stages of the racing season, he did give me a rundown of the key modifications made to set this record. Also, fellow Hellcat owner and racer John Gaddy was on hand to film the record setting manual transmission Hellcat Challenger run, so we have the best proof possible from a known member of the Hellcat community.

In other words, this manual transmission Hellcat Challenger record claim is as legit as it gets. For those wondering, this run as made at Great Lakes Dragaway in Union Grove Wisconsin and at the time of the run, Density Altitude was +780.

Bill Gamble’s Dodge Challenger SRT Hellcat with the 6-speed manual has extra power via new upper and lower pulleys, a nitrous system and a tune to bring everything together for the best output. To handle that extra power and to put it to the ground more efficiently, Gamble has added a stronger clutch and a stronger driveshaft, along with lightweight wheels wrapped in sticky tires. Essentially, Bill has the most common modifications among Hellcat owners, plus an aftermarket clutch to handle the added boost and the nitrous.

While the SRT Hellcat Challenger with the automatic transmission can be a bear to launch well, the manual transmission has the added element of difficulty, and that skill to both get away from the line and to get through the gears quickly it a big part of Bill Gamble setting this record. On the record run, Gamble’s Hellcat Challenger pulled a 1.49 60 foot time, which is smokin’ fast for any street car, but it is remarkable for a manual transmission street car.

After that incredible launch, Gamble storms down the track in his Hellcat Challenger, stopping the clock with a time of 10.25 and a speed of 140.5 miles per hour – beating Sipple’s record of 10.62.

As an interesting note, this Hellcat Challenger is Bill Gamble’s first manual transmission drag car. In most cases, when someone lays down incredible times with a stickshift car, they are long-time manual transmission racers – as was the case with Jon Sipple. In Gamble’s case, he has a long history of big truck pulling in a 1976 Dodge Ram Power Wagon, but he is relatively new to the world of drag racing a manual transmission car.

In other words, Gamble could get even quicker as he gets more seat time in his record setting Hellcat Challenger and should he turn quicker times – you’ll find the information here on TorqueNews.com.