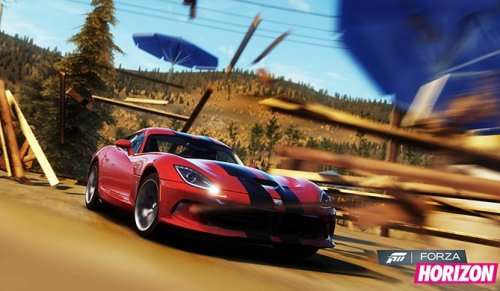 The Electronic Entertainment Expo (E3) kicked off in Los Angeles this morning and the key attraction to the gaming world is the fresh information on Forza Horizons – an open-world racing game that could be the game that sets the new standard by which every other driving game on the market is judged.
Advertisement

The folks at Turn 10, the company responsible for the incredible Forza racing series, have kept pretty quiet about the upcoming open world driving game Forza Horizon shy of the fact that the new game would feature the 2013 SRT Viper but today, we get our first good look at Forza Horizon.
And it looks absolutely incredible.

Forza Horizon is based in Colorado around the fictitious Horizon Festival – a festival centered around live music and some of the most incredible cars in the world. Unlike the traditional Forza Motorsport games that are focused strictly around sanctioned racing on closed circuit courses, Horizon offers a variety of racing types including point to point, drifting, stunt driving and circuit racing with much of the action taking place on the scenic open roads of Colorado. Turn 10 promises over 60 different types of racing surfaces on road and off, offering the first sample of the awesome Forza series dynamics on something other than a paved surface intended for racing. Unlike Forza 1 through 4, Horizon will have you racing more than cars, with events pitting you against helicopters and fight planes as you earn points for smashing through obstacles and roadside items.

In addition to offering up a little more info about what to expect from Forza Horizon, Turn 10 discussed the E3 demo that we hope to see arrive soon on the Xbox Live marketplace. The Demo begins as you sit in the Lakeside Diner when your group hears that the first driver to the first ten cars to arrive at the Horizon Festival will gain entry to the next day’s events. As the crew of drivers all tear out of the Diner parking lot, you find yourself in the first car that you get to drive in Forza Horizon – the 2013 SRT Viper.

The demo takes you along a variety of road surfaces in the 2013 SRT Viper, you will accumulate points for smashing things, drifting, and performer other unnamed stunts along the way. It is also during this first drive that you will experience another first for the Forza series – night racing. This demo race ends with an arrival at the Horizon Festival and from there – we can only dream of what this amazing new driving simulator has in store.

For the first time, the incredible driving simulation of the Forza Motorsport series will be applied to an open world road racing game that offers the various racing types of “arcade racers” but without the brutally unrealistic driving dynamics. Forza Horizon could be the culmination of strong points from every type of racing game, all wrapped up in the amazing graphics and gameplay from Turn 10.

Turn 10 has not revealed a car list for Forza Horizon and we will probably be without that piece of treasure until we are closer to the full launch of the game but based on the video (which you can watch below) and the various still shots from gameplay, we know some of the cars coming to Forza Horizon. In theory, we would like to think that Horizon will have every car that Forza Motorsport 4 has and more but that is mere speculation. We know that the 2013 SRT Viper GTS will be present along with the Ford GT, the Nissan Skyline R34, the Nissan 370Z, the Mitsubishi Evolution X, the Mazda RX7 FD3S, an old school Audi Quattro, the 2012 BMW M5, and the Alfa Romeo 8C Competizione. There also appear to be real life traffic vehicles including the new Ford Taurus and a Chrysler PT Cruiser.

Forza Horizon will officially hit stores on October 23rd, 2012 but Turn 10 has promised to offer more info and updates throughout the summer which will hopefully (please, please) include a playable demo version of the game. With any luck, Forza Horizon will come in some sort of Limited Edition VIP like we got with Forza Motorsport 4 that will cost a little more but will offer VIP players more cars, races and other goodies.

The first gameplay video of Forza Horizon is attached below and it is pure awesomeness…so crank up your speakers, click the “full screen” box and prepare for 2 minutes of gaming awesomeness. The game looks unbelievable and you can all be sure that TorqueNews will bring you more Forza Horizon news as it becomes available.