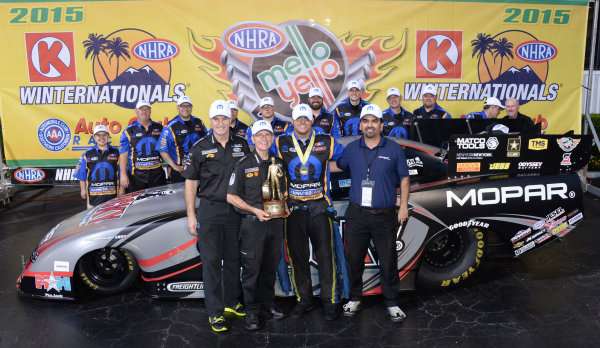 There were fiveDodge Charger funny cars competing this past weekend at the NHRA Winternationals in Pomona, California, and four of those teams were debuting the redesigned 2015 Charger body. While there had been practice sessions with these new Charger bodies, this past weekend’s 2015 season opener marked the first time that Jack Beckman, Matt Hagan, Ron Capps and Tommy Johnson Jr. would go head to head with the best from Toyota, Ford and Chevrolet with the newest Charger funny cars. The fifth and final Charger driver in the Winternationals field was John Hale, who was driving the Jim Dunn Charger that is still wearing the 2015 body.

Qualifying Struggles, Crashes
The qualifying rounds for the five Dodge Charger funny cars didn’t go as well as any of the teams would have liked or how any of the fans would have expected. John Hale was the first Mo-powered car to hit the track, and when Bob Bode’s Totoyta Camry had early traction issues, Hale ran an easy 4.440, off the pace at the end. Jack Beckman was the first driver to bring a 2015 Charger to the line, and like Hale, the run could have been better. Beckman got off of the line well against former Mopar driver Jeff Arend, but Beckman lost traction late in the run and had to settle for a 4.485. Ron Capps was the first 2015 Charger driver to turn a decent time, running a 4.102 at 311mph but Tommy Johnson Jr had more traction issues, running a balmy 4.227. Matt Hagan finished off round one of qualifying for the Dodge teams, running a 4.191 ay 296mph.

After the first round, Capps was 5th quickest, Hagan was 11th, Johnson was 12th and both Hale and Beckman were below the cut line at 13th and 15th. Not very good.

In the second round of qualifying, things didn’t get a whole lot better for the 2015 Charger funny cars. First off, Jack Beckman had engine troubles and didn’t make a full run. Both Ron Capps and John Hale had traction issues and didn’t improve on their first time and while Matt Hagan turned a strong time of 4.090, he blew a motor just past the finish line that set the car on fire (as seen in the video below). Hagan got out unharmed, but the team was forced to change car bodies before the real racing began. The good news for round two was that Tommy Johnson Jr ran a 4.018 at 314mph to grab the top spot (after two rounds).

After round two, Johnson was in the top spot, Hagan sat 8th, Capps was 10th and both Beckman and Hale were below the cut line, sitting 16th and 17th.

In the third round of qualifying, Jack Beckman had more engine problems at the starting line against John Hale and while Beckman’s 2015 Charger didn’t get a time, Hale’s time of 4.193 put him into the top 16 for the eliminations. Ron Capps also improved his position in round three, running a 4.037 at 317 and while Hagan’s run of 4.174 didn’t have any impact on the top of the ladder, his opponent’s run in the third round did, as Courtney Force ran a stunning 3.995 to claim the top spot. That time would not be beaten by any funny car at any point in the weekend. Tommy Johnson Jr also ran slower in round 3, leaving him in the 2nd spot after round three.

The fourth round of qualifying was rained out, leaving Beckman out of the field and locking in the rest of the field. This meant that Johnson would sit #2, Capps was #6, Hagan was #12 and Hale was #13 for eliminations.

In round two, the 2015 Charger of Matt Hagan beat John Hale’s 2014 Charger when Hale redlit and when Bob Bode broke at the line, Ron Capps got the easy win. Unfortunately, the quickest Charger in the field – Tommy Johnson Jr – lost a very close race to the new Chevrolet Camaro funny car driven by Robert Hight.

In round three, Matt Hagan beat Del Worsham at the starting line and turned one of the quickest passes of the day while teammate Ron Capps beat Robert Hight when his Camaro lost traction around half track. This setup an all-Charger final round between the two Hemi-powered funny cars of Don Schumacher Racing.

Season Points
After round one, Hagan leads the 2015 Mello Yello championship standings, with Capps 2nd, Johnson 6th and Hale 7th.