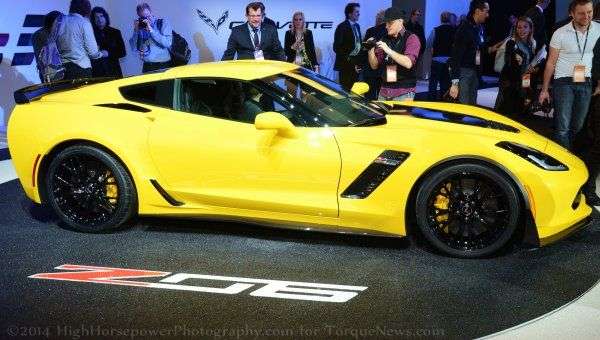 The 2015 Chevrolet Corvette Z06 will be the first modern ultra high performance Vette to feature an automatic transmission and in a recent interview, General Motors’ Bill Goodrich explained what the automaker did to ensure that the new 8L90 transmission was strong enough – and good enough – to help the C7 Z06 put all of that power to the ground.
Advertisement

In the past, cars like the Chevrolet Corvette Z06 or ZR1 were only offered with a manual transmission because traditional fluid-driven automatic transmission technology just couldn’t provide the type of performance expected from a gearbox in a car like this. Many people expected that the C7 Z06 would feature a dual clutch automatic so it was a shock when GM announced that they would use a more traditional automatic transmission design for the new 8L90, but to allow this new transmission to offer the kind of performance that is expected from the most track capable Corvette ever, GM put a tremendous amount of effort into engineering this new 8-speed automatic.

While speaking with Engine Technology International, GM’s assistant chief engineer of the 8L90 project talked about the unique construction features that make this new 8-speed automatic worthy of putting power to the ground in the 2015 Corvette Z06. The first effort was to get this transmission as light as possible, which cuts down on the overall weight of the unique while also making the transmission quicker shifting and more efficient with some lightweight moving parts. The gearset carrier and the housing for the internal clutch system are comprised of lightweight aluminum with high strength steel inserts used in the areas that receive the most stress under load. Next, both the control system cover plate and the clutch piston housing are made from magnesium. Finally, the portions of the transmission which receive the lowest amount of stress have had holes punched through to remove unnecessary weight.

Goodrich also explained that the 2015 Chevrolet Corvette Z06’s 8L90 transmission calls upon four separate gearsets and five clutches. Regardless of which gear the 2015 Z06 is in, there are always three clutches engaged while two remain open, which minimizes the drag caused by more clutches being open under load. This will help the new automatic transmission to be more efficient in putting power to the wheels while possibly even affording the C7 Z06 better fuel economy.

Finally, GM has said since they first introduced the 2015 Chevrolet Corvette Z06 that the new 8-speed automatic will shift as quickly as the top dual clutch transmission. Their benchmark was the PDK transmission in the current Porsche 911 and GM claims that their new 8L90 will shift more quickly than that pricy German sports car.