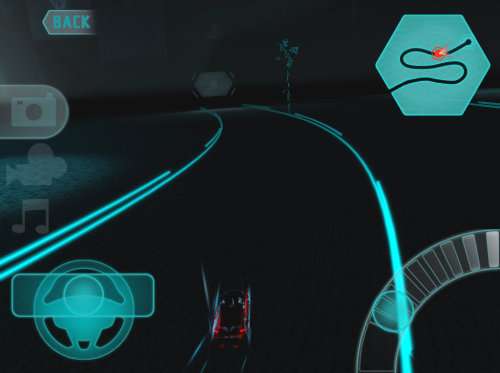 The crown jewel of Ford’s display at the 2012 North American International Auto Show in Detroit will likely be the newly redesigned 2013 Ford Fusion and while January 9th is a long way away, Ford is offering Android, iPad and iPhone users a chance to learn about the new midsized sedan gradually over the next four weeks with the new Ford Fusion App.
Advertisement

In a world where there is an app for everything, it would only make sense that one of the bestselling cars in America would have its own app so the new free program teasing the 2013 Ford Fusion is an innovative way to attract prospective buyers - or just people who like playing games on their tablet or phone - to learn about the new Fusion.

The 2013 Ford Fusion app offers iPad, iPhone and Android based phone/tablet users a chance to drive the new midsized sedan in a virtual world that looks strangely like something out of Tron (shown on the right). Once you download the App for your Apple or Android device, you will need to locate a Ford blue oval emblem and aim your devices’ camera at the Ford logo - at which point the logo on your screen will become the power button for the app. This Ford emblem can be in any form; be it on the front of a car or simple a logo that you search for on the internet. Once turned on, you are introduced to the 2013 Ford Fusion.

Before you run off to your Android or Apple App store to get a look at the 2013 Ford Fusion, you should understand that until the new Fusion is formally unveiled, the car in the new Ford Fusion app is heavily disguised in more Tron-style artwork. However, as we near the Detroit Auto Show debut of the new 2013 Fusion, the app will automatically unveil small portions of the car until the entire car is visible. Also, even when you are racing with the massively cloaked Fusion in the new app, when you reach the finish line you will be given a chance to learn something about the new car. The controls are simple…you use the steering wheel on the lower left side of the screen to steer and the quarter-circle bar on the lower right side controls the speed of the masked up 2013 Fusion but while the controls are simple, the game itself is not.

We had a chance tonight to experience the new 2013 Ford Fusion app on an iPad and even if you are not in the market for a new mid-sized sedan, the free Fusion app is well worth the download time. Ford reps told us that the Fusion App for Apple users is currently available and for those of us (including yours truly) who are using a Droid based device, the game should soon be available. The Fusion App is so large that it doesn’t fit in the Droid App store but Android users can download it at FordFusionApp.com.

As for the 2013 Ford Fusion itself, we will all have to wait until the new sedan makes its formal debut on January 9th but for the time being, the new Ford Fusion App is a fun way for Ford to tease the new car until the debut day is upon us.