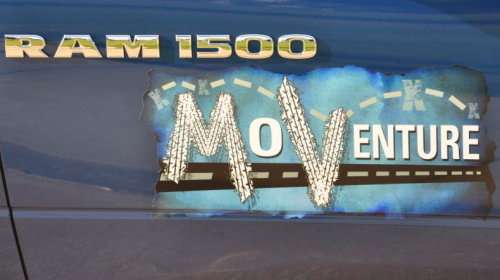 The MoVenture hits the halfway point

We previously brought you the news of the MoVenture – a cross country road rally sponsored by Chrysler’s performance and aftermarket division Mopar and as hump day arrives, the MoVenture teams are halfway through their race from Detroit to Colorado.
Advertisement

The ten teams who had their videos picked from tons of online entries arrived this past Friday at the Walter P. Chrysler Museum in Auburn Hills, Michigan to be introduced to the vehicles that they would spend the next week driving across the country. The folks at Mopar picked two teams to represent each of the five Chrysler Group brands, with a color assigned to each team for easy tracking as they raced from Detroit to Colorado – completing challenges to rack up points along the way. As the ten teams of two filed off of their shuttles at the WPC Museum, they were greeted by members of the media, Chrysler/Mopar public relations experts helping with the MoVenture and brand managers for the various makes and models.

The MoVenture is a simple rally race and each day, the teams are given a packet of information detailing where they are headed on that specific day. Along their route, there are a variety of challenges – both mandatory and optional – and the more the teams can fit in during their allotted time the more points they can rack up. Also, thanks to the magic of GPS tracking, the teams can also be penalized for breaking the speed limit so accurate navigation may prove to be more important than high speeds. Also, the teams can get extra points for their social network interactions while on the road, including various images being voted upon by their “friends” online resulting in more points.

A look at the first day’s events provide an interesting perspective into just how unusual the different challenges are along the route of the MoVenture. Their stops included the American Museum of Magic, Tony Packo’s Café in Toledo, the Kellogg World Headquarters, Rutherford B Hayes Presidential Home, Plymouth Speedway in Indiana (including the Dodge Tire Change Challenge), Michael Jackson’s birthplace, and the finish line was the Navy Pier in Chicago. For more information on what they had to do at those various stopping points, click here to have a look at the MoVenture “Follow Along” website. On the left side in grey, items are grouped by date and if you click on a given event, there will be an explanation on the upper right side giving you a briefing on what this stop or challenge entailed.

The MoVenture finishes up this weekend at the Mopar Mile High Nationals in Colorado, with the winning team of Mopar enthusiasts taking home $5,000 in Mopar parts and accessories. For all of your MoVenture information, including a look at the teams and their individual challenge results, click here!