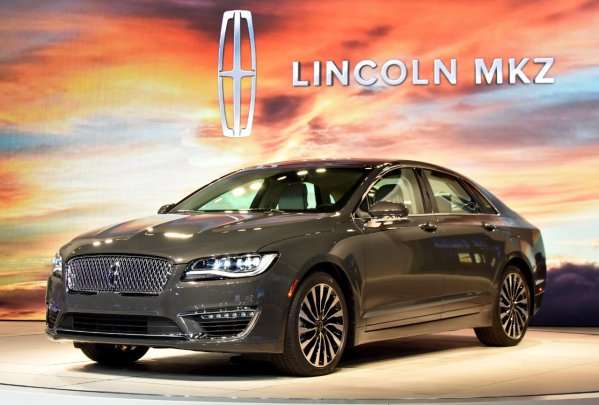 The Lincoln MKZ shares a platform with the hot-selling Ford Fusion, but with the opening of the 2015 Los Angeles Auto Show, the MKZ is getting new features to make it less like the Fusion and more like a proper midsized luxury car – with 400 twin turbocharged horsepower.
Advertisement

Midsized sedans are typically among the bestselling cars in America from month to month and while luxury sedan buyers have traditionally preferred larger vehicles, there has been a great deal of growth in the segment of the Lincoln MKZ. The problem is that while a long list of impressive new or redesigned luxury sedans have entered the race over the past few years with more interior space, more high tech goodies and – most importantly – more performance. The Lincoln MKZ over the past few years is a fine car, but there is no question that it falls a touch short of some of the bigger movers in the midsized luxury sedan segment.

That all changes with the 2017 Lincoln MKZ, which gets a more refined, more luxurious interior, a facelifted front end with a higher end look, a new twin turbo V6 that delivers more power than any previous Lincoln model and a similar advanced all-wheel drive system to the one found in the Ford Focus RS.

The New Face of Lincoln
The most noticeable change with the 2017 Lincoln MKZ comes up front, where the winged grille design is completely removed and in its place is a bolder, more upright front end featuring a similar grille and headlight design to that first seen on the Lincoln Continental Concept. The sharp, angular headlights are also gone and the new design with larger lenses protecting LED accents and HID headlights works beautifully with the new grille to give the 2017 MKZ a look that will stand out (for a good reason) in the crowded segment. Across the bottom, there are larger, more aggressive grille openings with LED driving lights, bolstering the bold feel of this new front end.

The rest of the 2017 Lincoln MKZ appears to be unchanged, but that isn’t a bad thing. The side profile of the current MKZ is sleek and sexy, with a rear fascia and taillight combination that ties the car up perfectly. Since the current MKZ was introduced, many people have complimented the side lines and rear end while the front end was a point of criticism. With the 2017 MKZ, it is hard to criticize any aspect of the exterior.

On the inside, the 2017 Lincoln MKZ gets lightly refreshed, focusing on the infotainment and HVAC controls which have gone away from the touch-sensitive controls of the current MKZ in favor of traditional buttons and knobs – in addition to the large touch screen. There are also new finishes throughout the cabin to give it a more comfortable and more luxurious feel, but the interior really takes a back seat to the exterior changes and the new engine.

The Most Powerful Lincoln Ever
The 2017 Lincoln MKZ will be offered with a standard 2.0L EcoBoost engine with 245hp and an optional hybrid model, but the big news for the 2017 MKZ is the new twin turbo V6. Rather than going with the 3.5L EcoBoost that powers the Lincoln MKS, the 2017 MKZ packs an all-new engine that is built from the architecture of the new 2015 F150 2.7L EcoBoost. In the new Lincoln, this engine is stretched to 3.0 liters and the output is a stunning 400 horsepower and 400lb-ft of torque – making the new MKZ the most powerful Lincoln production model ever.

That power is channeled to all four wheels via a 6-speed automatic transmission and an advanced all-wheel drive system, but for those 2017 MKZ buyers who want even greater performance, there is a new Driver’s Package which adds a similar torque vectoring system to that found in the new Ford Focus RS. The Driver’s Package also adds special 19 inch wheels wrapped in high performance rubber, package-specific seats, a handful of appearance upgrades and a continuously damping suspension system that should make this the best handling Lincoln of all time, too.

400 horsepower, 400lb-ft of torque, an AWD system designed for a high performance vehicle and an adaptive suspension setup makes it clear that the 2017 MKZ is more committed to performance than any previous Lincoln model.

We don’t have any details on pricing just yet, but with the 2017 Lincoln MKZ expected to launch mid-2016, we should have full information on this new American luxury sedan within the next few months – perhaps at the 2016 Detroit Auto Show.