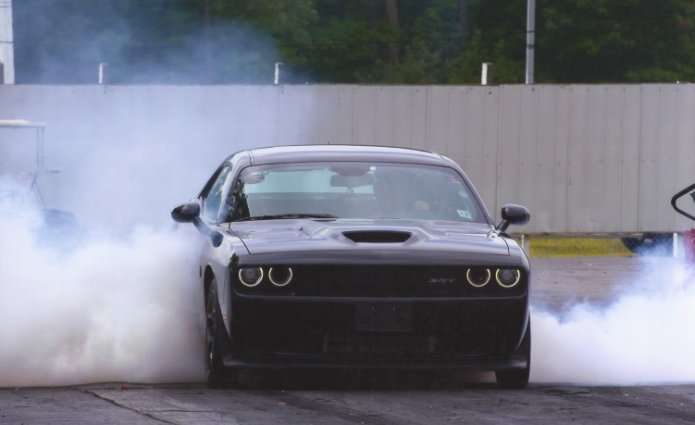 This past weekend, Michael Cole’s Dodge Challenger SRT Hellcat blasted down the quarter mile in just 9.05 seconds, making it the quickest automatic transmission Hellcat car in the world – and the odds are good that this supercharged Mopar muscle car has the capabilities to run in the 8s.
Advertisement

The quickest Dodge Challenger SRT Hellcat in the world is the “007 car” owned and raced by the Epling Garage team of Leon, Jason and Logan Epling. That car is equipped with a Liberty manual transmission, so the quickest Hellcat car in the world is a three-pedal machine, but this past weekend, an automatic Hellcat Challenger got closer to the Epling record than anyone else.

While running at the Modern Street Hemi Shootout final event at Atco Raceway, Michael Cole and his Dodge Challenger SRT Hellcat rocketed down the quarter mile in just 9.05 seconds. That makes his car the quickest automatic transmission Hellcat in the world while being the second-quickest Hellcat car overall – trailing only the Epling Garage record of 8.91 at 156.14mph.

Michael Cole’s Record-Setting Hellcat
While Michael Cole’s record-setting quarter mile of 9.05 is impressive, the fact that this car isn’t all that heavily modified makes this run even more amazing. The factory 8-speed automatic transmission is stock, as is the rear differential with the factory 2.62 gears. He has swapped to smaller brakes in order to fit the 15” race wheels and big, fat tires out back, but the transmission and rear differential have not been modified, shy of the differential brace and a transmission shift tune. Working with those big tires is a race-ready suspension setup, allowing the car to get away from the line more efficiently.

The supercharged 6.2L Hellcat Hemi is not stock, but it is close to it, with the only upgrades being a smaller upper pulley, a nitrous setup and an excellent E85 tune from Injected Engineering. The supercharger, the camshaft, the cylinder heads, the engine block and the rotating assembly are all stock – unlike the Hellcat racers with head work, an aftermarket camshaft or more cubic inches.

Finally, to make his Dodge Challenger SRT Hellcat legal to run into the 8s, Cole added an 8-point roll cage with the appropriate harness and a parachute. It should go without saying, but Michael Cole also introduces the “good driver mod” to get his lightly modified Hellcat Challenger so close to the 8-second range.

Setting the Record
Michael Cole headed to Atco last weekend for the Modern Street Hemi Shootout finals with the hopes of winning some money and maybe setting a record. On Friday, he started the day with a 9.18 and for the next run, he turned up the nitrous levels a bit with hopes of breaking into the 8s. Unfortunately, a nitrous backfire in the burnout box blew up the supercharger, putting the rest of his weekend in jeopardy.

However, Cole drove home, got his rebuilt supercharger from Jon Bond Performance and headed back to the track. Once there, guys from EMPNEWYORK, Swamp Yankee Performance, Injected Engineering and Team Move Over helped swap in the rebuilt blower to get the car back on the track. They succeeded in getting the car running at the track and on his next run, Michael Cole laid down his record-setting 9.05 at 155.6 miles per hour.

That was the quickest quarter mile time by any Hellcat-powered Dodge Challenger or Charger, falling short of the overall Hellcat record by just fourteen hundredths of a second.

He turned up the nitrous pressure for his next run, but that run never came – forcing Cole to settle for just having the quickest automatic Hellcat car in the world. However, it seems likely that we could see this car making a run at the Epling Garage 8.91 record in the near future.