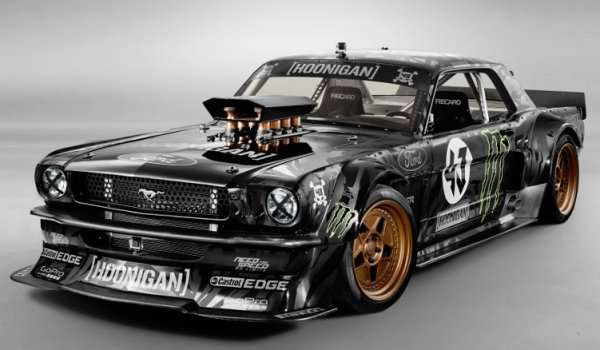 Among the many Ford Mustang show cars debuting today at SEMA is the Ken Block Hoonicorn RTR – a super modified 1965 Ford Mustang featuring the all-wheel drive system that Block will require when he films Gymkhana Seven with this wicked pony car.
Advertisement

Ken Block is best known for showing off his high speed driving maneuvers in an all-wheel drive Ford Fiesta, but at the 2014 SEMA Show in Las Vegas, Block has rolled out an incredible all-wheel drive Ford Mustang that will serve as his vehicle of choice in his upcoming Gymkhana Seven video. If you are reading this yet you are somehow unfamiliar with the Ken Block Gymkhana videos, Gymkhana Five (my favorite) is embedded at the end of this piece. Even if you have seen it, it is worth watching again.

“I’m stoked to be able to publicly unveil this car for the first time at SEMA in the Ford booth,” said Block. “This is a project that I’ve been working on for two years, so to see it fully come to fruition and be able to drive it for Gymkhana SEVEN was absolutely amazing. I also knew that working with Vaughn [Gittin Jr.] and his RTR team was the right choice for this project since Mustang’s are their world, but they really went above and beyond on this car. The attention to detail with the fabrication and bodywork blows my mind. This is hands-down the best Gymkhana car I’ve had yet.”

Ken Block’s AWD 1965 Mustang – the Hoonicorn
Ken Block has coined what he does “Hoonage” and he is the head “Hoonigan” so it makes sense that his first Ford Mustang built specifically for one of his multi-million view YouTube videos would be named the Hoonicorn. Playing off of the Hoonigan verbiage, this 65 Mustang is the ultimate automotive unicorn, packing monster American V8 power in a vintage pony car – with an advanced all-wheel drive system. A Mustang like this has previously been reserved for the world of video games where you can add all-wheel drive to pretty much anything. However, Ken Block’s Hoonicorn Mustang is very, very real.

Ken Block’s Hoonicorn RTR Ford Mustang is based on a 1965 Mustang notchback and it was built by ASD Motorsports in Charlotte North Carolina. With help from Vaughn Gittin Jr’s RTR team and Block’s own Hoonigan Racing Division, ASD spent two years converting this classic pony car into the ultimate tire slaying, high performance classic Mustang. Under the hood is a Roush Yates Racing V8 measuring 410 cubic inches, which sends 845 horsepower and 720lb-ft of torque to all four wheels via a 6-speed Sadev SC90-24 all-wheel drive transmission system. Helping put (some of) that power to the ground is a set of Fifteen52 three piece R40 wheels wrapped in Pirelli Trofeo R tires that are specifically designed for Ken Block and his high flying Hoonage.

In addition to the go-fast goodies, the 1965 Ford Mustang Hoonicorn RTR wears a custom widebody treatment that was a joint effort between Block’s people, Gittin’s people and ASD. Under that unique skin is a custom suspension setup and a tubular chassis from ASD make this car very light and very tough – so it can stand up to all of the abuse that it will meet in filming Gymkhana Seven.

The First Gymkhana Mustang
Featuring the Ford Mustang Hoonicorn in Gymkhana Seven is a brilliant move by both Ken Block and the folks at Ford. While there are plenty of rally fans and sport compact fans who love watching Block get slideways in his fast paced videos, there is no question that the Ford Mustang has a much, much bigger following. Featuring a Mustang in Gymkhana Seven will almost certainly draw more attention up front, as Mustang owners who previously had no interest in watching a Ford Fiesta slide around a bunch of obstacles will tune in to see their favorite car under the controls of one of the world’s most famous drivers.