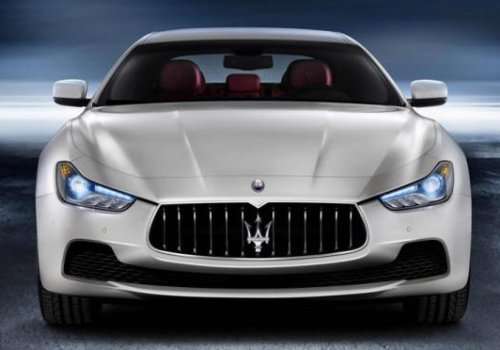 The new Maserati Ghibli made its racing debut this past weekend at the Goodwood Festival of Speed in the United Kingdom but the biggest news for lovers of high performance Italian luxury sports cars was the first bit of pricing information for the new Ghibli across all three forms that will be sold in the UK – numbers on which we can base some guesses at what American Ghibli buyers can expect to pay.
Advertisement

To be clear, the Maserati Ghibli pricing that we will discuss here is official but these are numbers stated in British Pounds for the United Kingdom only. No other official pricing has been announced by parent company Fiat SpA but based on the current exchange rates, we can take an early look at how much Ghibli buyers here in the US can expect to pay when they arrive later this year.

In the United Kingdom, the 2014 Maserati Ghibli powered by the Chrysler Pentastar-based twin turbocharged V6 with 325 horsepower and 369lb0ft of torque will carry a starting price of £52,275. This model is expected to dash from 0-62 miles per hour in 5.6 seconds en route to a top speed of 163 miles per hour while also being able to achieve around 29 miles per gallon on the European test cycle. Based on current conversion rates between the British Pound and the US Dollar, that same model would cost $79,045 based strictly on conversion rates. Early speculation suggested that the entry level Ghibli would cost somewhere in the area of $75,000 in the US so even with direct conversion (which is unlikely), this price puts those early guesses in the proper ballpark. When British buyers step up to the 2014 Maserati Ghibli S packing 404 horsepower, 406lb-ft of torque and the ability to average 27 miles per gallon with its own twin turbocharged V6, they can expect to pay at least £63,415…or $95,890 in US Dollars. Rumors suggest that the Ghibli S, which will be able to hit 62 from a stop in just 5 seconds flat on its way to a top speed of 177 miles per hour would start around $91,000 so once again – those guesses could prove to be very accurate.

Finally, while the diesel powered Maserati Ghibli isnt expected to arrive in US dealerships, pricing for the European sold Ghibli Diesel was also included at Goodwood. The oil burning package has the lowest horsepower of the range (271hp) but the highest torque output (420lb-ft of torque) and most importantly – the projected fuel economy figures of 47mpg will make the diesel Maserati by far the most efficient. Oh, it will also be the least expensive with a price for UK buyers starting at just £48,830. That is $73,835 in US Dollars but it doesn’t make much difference to the American buyer since he Ghibli Diesel is not slated for US sales. The 2014 Maserati Ghibli will comfortably be the least expensive vehicle in the Maserati showroom, replacing the Gran Turismo S Automatic that starts at $123,000. Even if the prices in the US are inflated greatly compared to British pricing, the Ghibli will still be the lowest price option for prospective new Maserati buyers. However, the pricing of the vehicles which the Ghibli will most closely compete could have an impact on American pricing when it hits our shores later this year. Maserati expects that the Ghibli will do battle with the likes of the Audi S6, the Audi S7, the BMW 6 Series Gran Coupe and the Jaguar XF. The S6 pricing starts at $71,900, the S7 starts at $78,800, the 6 Series Gran Coupe starts at $77,100 and the Jaguar XF rings in as the bargain of the bunch at just $50,000 (not counting the low performance 4-cylinder models). With the exception of the very affordable Jaguar, the introductory price of the Maserati Ghibli in the $75k range should put this new Italian luxury sport sedan right in the hunt although a bit towards the higher end of the scale. At the same time, the Ghibli will almost certainly be the most exclusive of that group and exclusivity comes with a price so simply comparing the new Ghibli to those other luxury sport sedans based on their pricing and specs ignores the important aspect of exclusivity.