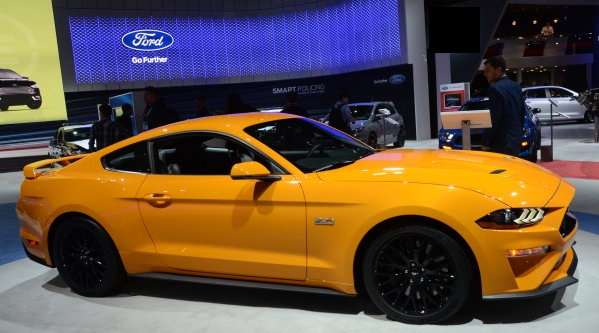 Make your Phone Roar like the Ford Mustang GT

Ford Motor Company has just rolled out a ringtone which calls upon the roar of the 2018 Mustang GT’s 5.0L V8 as it revs and races off into the distance – and it’s free.
Advertisement

The 2018 Ford Mustang GT comes with a standard Active Valve Performance Exhaust system with four modes with varying levels of sound, letting the owner effectively pick the volume of their engine roar. To showcase the exhaust tone of the 2018 Mustang GT with the Active Valve Performance Exhaust system in Track mode – the Motor Company has introduced a ringtone featuring the sound of the 5.0L Coyote V8.

Active Valve Performance Exhaust
Exhaust systems with varying volume levels have been popular among performance car owners, as this system allows the drivers to decide when they want their car to whisper or roar. The 2018 Ford Mustang GT will come with a standard Active Valve Performance Exhaust system, so that when the owner fires up the car to leave for work in the morning, it won’t wake up his neighbors, but when he drives past that annoying neighbor with the noisy little Honda – he can let the 5.0L V8 roar with the push of a button.

The 2018 Mustang GT exhaust system uses a system of electronically controlled valves to increase the volume at the quad tips. When the valves are closed, there is less exhaust sound, but when the valves open, the tone travels through a less-muffled portion of the system for a much louder roar. In Track Mode, the system opens the valves as the throttle input increases, so as the driver revs the engine, the valves quickly open to increase the volume of the roar. Also, when at wide open throttle, the valves are open and the engine is free to sing the song of its people as loudly as possible.

The 2018 Mustang GT Ringtone
To offer an example of the Active Valve Performance Exhaust of the 2018 Ford Mustang GT in action, the Motor Company put together a ringtone showcasing the Track Mode in action. The valves are closed as the engine first begins to rev, but they quickly open, making the exhaust tone louder. After a few revs, the Mustang GT races off into the distance, running up through the gears as the Active Valve Performance Exhaust roars to its fullest potential.

Best of all, this new ringtone is free, so if you are a Mustang fan, a Mustang owner or you just want your phone to sound like an American muscle car – you can download it here.

Elon Musk Changes His Word to Jay Leno About The Size of Tesla Cybertruck
Does The Cybertruck Fit the Boring Company's Tunnel?
END_OF_DOCUMENT_TOKEN_TO_BE_REPLACED