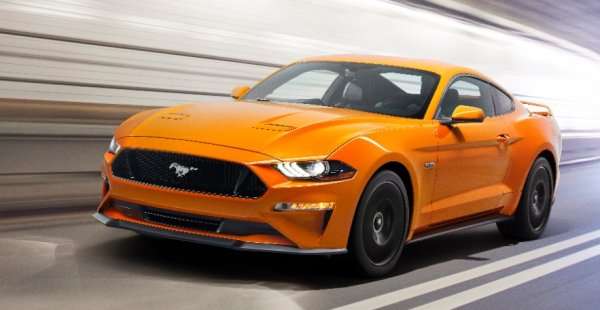 Ford Motor Company announced today that the 2018 Ford Mustang and 2018 Ford F150 will both feature a new Nighttime Pedestrian Detection system which can apply the brakes in the event of an imminent collision with a person on foot – a feature which Ford says will reduce driver stress at night.
Advertisement

Ford’s press release this morning made it official that both the 2018 Mustang and the 2018 F150 will both feature a new Nighttime Pedestrian Detection system. The company offered details on how the system works, but before getting into that, I want to talk a little about the beginning of Ford’s announcement.

Drivers are Afraid of the Dark
Ford’s announcement started by referencing a poll that the Motor Company conducted which found that most drivers’ greatest fear when driving at night is hitting a pedestrian they cannot see in the dark. Ford points out that some experts believe that this fear of hitting a person on foot while driving at night stems from the early day of mankind, where man was more likely to be attacked by predators at night…essentially causing humans to be inherently afraid of the dark.

When people worry about hitting something that they cannot see and cannot predict while driving at night, their increased stress levels can negatively impact their driving abilities, so to help cut back on that stress – Ford Motor Company is rolling out their Nighttime Pedestrian Detection system.

“We know some drivers find hitting the road at night a stressful experience. Especially driving in towns and cities, pedestrians – sometimes distracted by mobiles – can without warning step into the road, leaving even alert drivers very little time to avoid an accident,” said Gregor Allexi, active safety engineer, Ford of Europe. “Day and night, Pedestrian Detection is designed to help identify people already in – or about to step into – the road ahead.”

So, because cavemen were afraid of being eaten while they slept, modern day man has an increased fear of running over people walking down the street. As strange as it seems, it does help to explain why so many people are uncomfortable when driving in the dark.

The system works by collecting information from the radar sensors in the front end of the new Ford vehicle and a camera mounted in the rear view mirror assembly. As the 2018 Mustang or F150 drives down a dark road, the system uses the radar and the camera to scan the area in front of the vehicle, with the camera taking 30 images per second in the effort to identify pedestrian-shaped objects and the radar system scanning the motion of those objects. Should the system detect a pedestrian headed into the path of the vehicle, the driver will be alerted with a chime and a flashing icon on the dash. If the driver does not react and a collision with the pedestrian is imminent – the system can automatically apply the brakes.

For example, say that you are driving the 2018 Ford Mustang or the 2018 Ford F150 down a dark street as a jogger mindlessly runs across the road in front of your vehicle. The system will detect the jogger with the camera and the radar will track their movement. When the system recognizes that the jogger is going to be in the path of the vehicle, a chime makes sure that you are aware, but if you don’t swerve or stop quickly enough – the vehicle will stop for you.

Of course, this system will also work when it is light out, but with there being a much greater risk of a driver not noticing a pedestrian who is about to step off of the curb in front of them, the nighttime aspect will play a greater role in making both of these 2018 Ford vehicles safer for everyone.