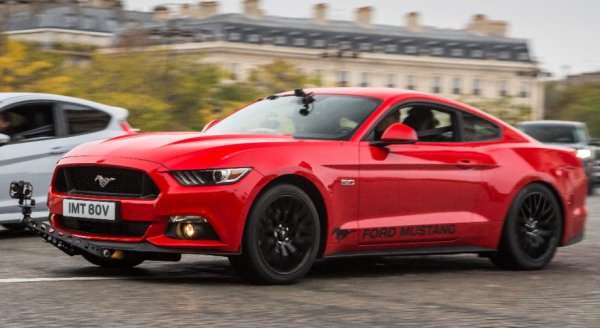 Ford Races through the Streets of Paris in a Mustang GT

Ford Motor Company recently worked with French authorities to make a short film showing the new Ford Mustang GT blasting through the streets of Paris, serving as a modern remake of the cult classic ‘C'était un rendez-vous’ and making for one of the most unique driving videos you will find online.
Advertisement

Ford Motor Company announced today that with the help of a new Mustang GT, the automaker has essentially remade the classic French cult driving classic ‘C'était un rendez-vous’. However, Ford has made the video legally with the permission of the local police and with the use of modern camera technology – allowing us to enjoy the famous race through Paris in 360 degree and virtual reality format.

‘C'était un rendez-vous’, which translates to “It was a Date”, is a short film directed by Claude Lelouch back in 1976. The film is shot almost entirely from a front-facing camera mounted on the front of an unknown vehicle as it races through the streets of Paris early on a Sunday morning. For 8 minutes, the mystery car speeds through the bustling French city, ignoring traffic signals, blasting past pedestrians and animals in the street, driving the wrong way up one-way streets, ignoring the lines on the road and generally driving in a manner which would get most people arrested.

Since we never see the car or the driver, there has always been much speculation as to who was doing the driving – and just what kind of car was being tossed around the Parisian streets. According to director Claude Lelouch, the car in question was a Mercedes Benz 450SEL, but the combination of the engine sound and transmission shifts lead people to believe that it was not a Mercedes. Lelouch claimed that the sound of his Ferrari 275GTB, dubbed in during the post-production process, but some people believe that he was actually driving the Ferrari through Paris at high speed.

In the end, the driver gets out of the car and walks through the headlight beams to embrace a lovely young woman – hence the title “It was a date”. While the premise of the piece was for the driver to get to his hot date on time, the movie has become famous for the high speed, sightseeing action in Paris.

The problem was that the film was made without the approval of the French or Parisian authorities and rumors indicated that he was later arrested for his driving stunts, but thanks to all of the mysteries around the video – it has become a cult classic.

‘C’était un Rendez-Vous’ Take 2
With the huge success of the new Ford Mustang in markets all over the world, the Motor Company wanted to do something special to feature the American muscle car in Europe. They decided that the best way to show off the new Mustang GT was to remake C’était un Rendez-Vous – just without all of the illegalities and mystery.

This time, with the approval of the Parisian authorities, C’était un Rendez-Vous features the 2016 Ford Mustang GT running the same basic path of the original film. This time, we can actually see the bright orange Mustang thanks to the advanced camera systems, which also allowed the Motor Company to offer this film in both 360 view and virtual reality view.

“I had goose bumps watching ‘C’etait un Rendez-Vous’ forty years later in virtual reality. At the time, my movie was about the feeling of freedom and the pleasure driving generates,” Lelouch said. “I knew that Ford would do more than just a tribute to the original in this new version. I am delighted to see the Mustang again and to close the loop fifty years after ‘A Man and a Woman’”.

This clip below offers a quick preview of C’était un Rendez-Vous featuring the new Ford Mustang GT, and while this is just a minute of the film – we can expect the whole run later this month. We will all be able to watch the film on a VR headset or with a properly equipped mobile device, but in the meantime, we get a glimpse of what to expect with the short video below.