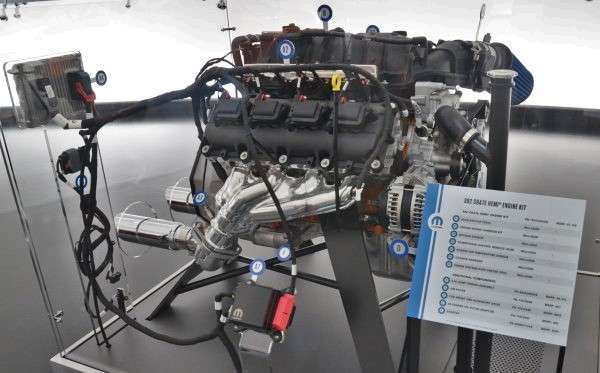 It has become quite popular for owners of classic Mopar muscle cars to swap in one of the modern Hemi engines from the Dodge Challenger, so to make that conversion even easier, Mopar has introduced turnkey crate engine packages for the 5.7L and 6.4L Hemi – offering R/T and SRT power in your old school machine.
Advertisement

Earlier this week, we brought you a look at the 1971 Dodge Challenger Shakedown from the Mopar display at SEMA 2016. That classic muscle car has been fitted with a modern 6.4L/392 cubic inch Hemi from the 2015+ Dodge Challenger SRT 392, or so it seemed. That powerplant is actually one of the new 392 cubic inch Mopar crate engines, complete with just about everything needed to drop it into the car and fire it up.

“Our new Mopar Crate HEMI Engine Kits answer enthusiast demand for a relatively simple solution for plugging modern-day HEMI engine power into their classic Mopar rides,” said Pietro Gorlier, Head of Parts and Service (Mopar), FCA – Global. “The engine kits include the hardware to plant a 5.7-liter or 6.4-liter HEMI engine under the hood with the factory-backed confidence that comes when using Mopar parts. They also offer optional front-end accessory kits like power steering or even exhaust manifolds to make installation easier. Starting today, our fans can order the kit online and start working on their favorite project with the peace of mind that comes when using a Mopar product.”

The New Mopar Hemi Crate Engine Kits
While there are already plenty of old school Mopar muscle cars rolling around the USA with modern Hemi power, the people who built those machines would have had to piece together all of the components to get the engine running. They could have done this by acquiring a wrecked Challenger or Charger and tearing everything out, or they could have pieced together the parts at their local Dodge dealership. In either case, there was some measure of headache involved in lining up all of the parts needed to make the 5.7L Hemi from the Challenger R/T or the 392 Hemi from the Charger Scat Pack to run in your 1973 Challenger.

That all changes with these new Mopar crate engine kits, as they take all of the guesswork and all of the hunting out of adding modern power to your classic muscle.

The heart of the package is the “crate engine kit”, which includes the accelerator pedal, the engine wiring harness, the oxygen sensor, the powertrain control module (the brain of the engine), the charge air temperature sensor, the chassis harness and the power distribution center. With all of these items, an engine and a battery, you can make the Hemi run. This kit for either the 5.7L Hemi or the 392ci Hemi has an MSRP of $1,795.(More on Page 2)

In short, if you want to add modern power to your classic Mopar muscle car, these new crate engine kits can get you running for roughly $7,865 for 383 horsepower or $11,130 for 485 horsepower.

After the Mopar team introduced the media to the new 392 crate engine, they fired it up and it sounds amazing. Fortunately, I caught it on video which you can check out below!