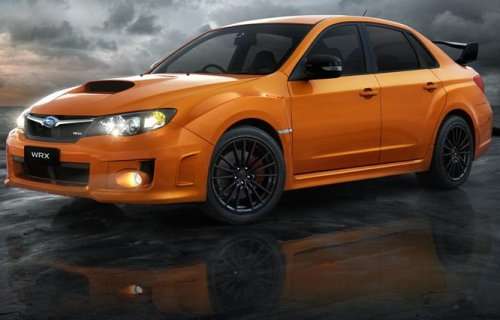 Earlier this week, Subaru of Australia announced that they would once again be offering the limited edition WRX Club Sport package for Subbie performance junkies ‘down under’ – with production of this sharp-looking package being limited to just 300 units.
Advertisement

The new Subaru WRX Club Spec 11 follows in the tradition of the earlier Club Spec models with luxury upgrades inside, sporty upgrades outside and a flashy, unique paint option. Production is limited to just 300 units and all new Club Spec 11 models will be based on the WRX sedan fitted with a 5-speed manual transmission only. This drivetrain is good for 262 horsepower (195kW) @ 6,000rpm and 253lb-ft of torque (343NM) at 4,000rpm – enough to propel this sporty sedan from a stop to 62 miles per hour in just 5.3 seconds. Of course, the WRX Club Spec 11 comes with a sport tuned suspension and Subaru’s advanced all wheel drive system with a viscous limited slip differential.

The upgrades to the new Australia-only Subaru WRX Club Spec 11 package begin on the outside with black 17” lightweight wheels, a black rear spoiler (borrowed from the STI), black side mirrors, a unique Club Spec 11 exterior badge, unique WRX badging and the flashy Tangerine exterior paint choice shown on the right. The new WRX Club Spec 11 is also available in black. Inside, the Club Sport 11 sports a leather trim package that includes special Tangerine stitching on the seats for those vehicles with that exterior color while the black models feature red stitching along with a unique serialized Club Spec badge.

“WRX continues to have tremendous appeal in its widebody form and combined with the retained value traditionally achieved by these limited editions, there’s likely to be a lot of interest in these cars, which can be differentiated even further from standard WRX with the addition of the STI kit, “ said Nick Senior, Managing Director of Subaru Australia.

Those who want a little more performance out of their new Subaru WRX Club Spec 11 package can add the STI Kit. This adds the front chin spoiler from the standard STI, a short throw shifter and a strut tower brace for only $1,000 AUD ($1,011 USD). The STI Kit is available for the standard (non-Club Spec 11) WRX but it generally costs $2,100 AUD so Club Spec owners get a nice discount on the package.

The new Subaru WRX Club Spec 11 goes on sale in Australia in August with an MSRP of $41,490 AUD ($41,972 USD). Unfortunately, like past Club Spec models, this limited edition package will only be available in Australia. While all of the features of the Club Spec model can easily be added to a standard WRX via the aftermarket, there is no doubt that some American Subbie enthusiasts would love to be able to order their next WRX in that brilliant Tangerine exterior color.

This is the second limited production version of the Subaru Impreza announced in the past two weeks that will not be headed to the US. Last week, the Subaru WRX STI Spec C was released but only buyers in Japan will have a shot at that high performance model. Hopefully the folks at Subaru will cook something special up for US enthusiasts soon.