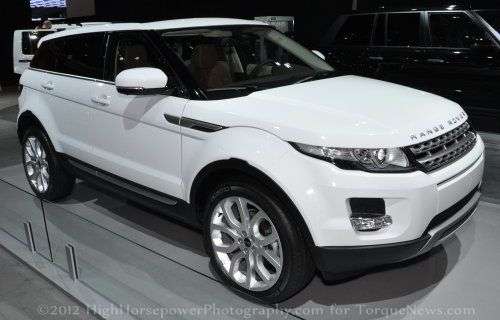 Land Rover working to meet high demand for the Evoque

The Land Rover Evoque is a big hit in the United States and while this is a good problem to have, Land Rover is currently struggling to keep up with the global demand of their award winning SUV but they plan to change that in September when the US allotment jumps by 25%.
Advertisement

The Land Rover Evoque production facility in Halewood, England is currently producing 750 examples of the super sleek sport utility vehicle each month for the United States market but with that rate – dealerships are having a hard time keeping vehicles on the lot. This presents a problem both to those consumers who know that they want to buy an Evoque as well as those shoppers who are considering a new Evoque. When these folks get to the Land Rover dealership only to learn that it could be a few weeks before the dealership has an Evoque to check out or buy, those customers are likely to go elsewhere – be it another Land Rover dealership or the dealership of a competitor like Mercedes Benz or BMW.

Land Rover has sold 4,355 examples of the Evoque in the first half of 2012 after selling just 2,244 units last year. 4,355 over six months is an average of 726 units per month so the company is already selling almost at full monthly capacity based on the average. However, when you consider the fact that some months were lower than 725, the Evoque was literally unavailable in many markets during better sales months in the US.

There is good news on the horizon as Jaguar Land Rover is planning to increase the allotment of new Evoque models for the US market from 750 to 1,000 starting in September. This increase of an extra 250 units per month headed to the US should allow the nation’s Land Rover dealerships a chance to keep these award winning sport utility vehicles on the lot for more time for shoppers to experience. Also, these extra US units should help those dealerships that are selling the Evoque at a high rate a better chance of meeting the high level of demand.

This increase in US allotment of the Land Rover Evoque could prove to be even more important throughout the end of the year as parent company Tats of India pushes American dealerships to combine both brands under one roof. Jaguar Land Rover hopes to see about half of their 97 stand alone dealerships (who sell only Jaguar or only Land Rover) merge, as almost half of Jaguar owners also own an SUV. The company wants those Jaguar owners to be able to buy their next sport utility vehicle at the same dealership where they bought and service their Jaguar. The first step will be combining these stand alone dealerships but once they are combined, the whole plan will be foiled if the company cannot produce and send enough Evoque models to the US to meet the demand.

Should the move to unify dealerships in the US work out as well as the company hopes, the extra 250 Land Rover Evoque SUVs per month may not be enough to meet the increased demand. The key issue is that the Evoque is popular in a variety of global markets so the Indian-owned Brittish automaker is faced with not just meeting the demand of the US market – but the demand of all of their global markets.