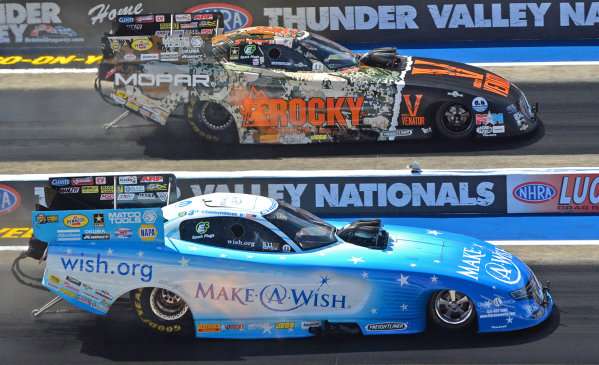 The Dodge Charger funny cars from Don Schumacher have been on an incredible run and when the teams headed to Bristol, Tennessee this past weekend, the quartet of Mopar drivers hoped that continue that run. From beginning to end, the Schumacher Charger funny cars dominated the class once again, holding the top qualifier position, turning in the quickest run in every single round and winning their 5th straight race in their 5th straight Mopar versus Mopar final.

Qualifying
For the first time in quite a few events, the Don Schumacher Dodge Charger teams didn’t come out as the quickest cars in the 1st round of qualifying, as John Force and his Chevrolet Camaro turned in the top time with a run of 3.956 at 320.05 miles per hour while Courtney Force and her Camaro turned in the 2nd quickest time with a run of 3.968 at 322.81 miles per hour. The quickest Dodge Charger driver was Matt Hagan, who ran a 3.971 at 322mph while Tommy Johnson Jr was the only other driver to crack into the 3-second range in round 1, laying down a 3.995 at 314mph.

Things got a little more serious in the 2nd round of qualifying, the Ron Capps driving his Dodge Charger to the top of the funny car class with a 3.884 at 323.66 miles per hour. Johnson and Hagan both turned in better runs in round 2 as well, but most of the other drivers in the class also ran quicker in the 2nd round of qualifying. As a result, Capps held onto the top spot and Hagan held onto the 4th place spot while Johnson sat 6th and Beckman sat 10th. Del Worsham in his Toyota climbed into the 2nd spot while Robert Hight and his Camaro held the 3rd spot after round 2.

In the 3rd round of qualifying, literally every car in the funny car class ran slower than their previous best, so the lineup didn’t change and in the 4th round, only Jack Beckman ran a time that topped his previous best for the weekend.

Heading into eliminations, Ron Capps held the top spot, marking the 4th time this season and the 21st time in his career that he was the fast qualifier for the event.

Eliminations
In the 1st round of eliminations, all four of the Don Schumacher Dodge Charger funny cars took the win, with Capps beating Jim Campbell, Beckman beating John Force, Hagan beat Tim Wilkerson and Johnson beat Cruz Pedregon. Joining the DSR Chargers in round 2 were Courtney Force (Camaro), Del Worsham (Toyota), Alexis DeJoria (Toyota) and Robert Hight (Camaro). Matt Hagan and his Charger turned in the quickest run of the 1st round.

In round #2, Ron Capps knocked out teammate Jack Beckman, Matt Hagan beat Courtney Force with a better reaction time and an identical ET, Alexis DeJoria beat Del Worsham and Tommy Johnson Jr beat Robert Hight – leading to another disappointing event for the John Force Racing Camaro funny cars. Johnson and Capps but turned in the quickest runs of the round with equal 3.990 ETs.

In the semifinals, Ron Capps took on Matt Hagan while Tommy Johnson JR took on Alexis DeJoria. Capps grabbed the starting line advantage, but he quickly lost traction, allowing Hagan to take the lead. Hagan then lost traction and the two danced their way down the track with Hagan taking the win. In the other semifinal race, Johnson jumped out to an early lead and never looked back, beating DeJoria with the best ET of the round.

In the finals, Tommy Johnson Jr got out to an early lead over Matt Hagan and while Hagan began to close the gap towards the end of the run, Johnson held out for the win.

Championship Standings
On the year, Ron Capps continues to hold the top spot and in beating Beckman, he extends his lead over Fast Jack to 55 points. Courtney Force is still in 3rd, now 100 points out of the lead and with his final round loss in Bristol, Matt Hagan has now moved into the 4th spot, 131 points back of Capps. With the win, Tommy Johnson Jr has jumped from 9th to 7th in the standings, now 166 points back of the leader.