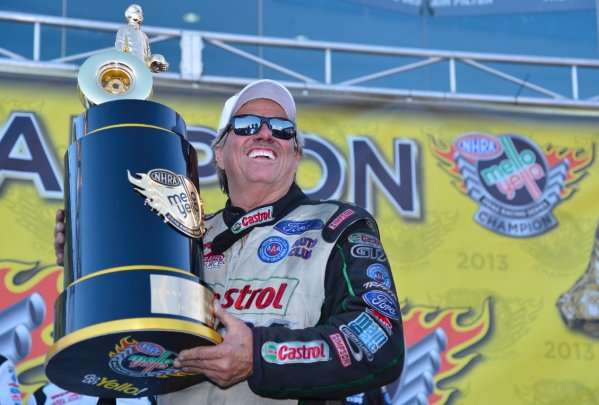 This past weekend, NHRA legend John Force won his 138th career event and his 75th event in a Ford Mustang but more importantly, the win allowed Force to clinch the 2013 Funny Car Championship – marking his 16th NHRA championship and his 10th behind the wheel of a Ford Mustang.
Advertisement

Back in August we learned that Ford Motor Company was pulling out of the NHRA drag racing circuit after the 2014 season and that would leave a variety of very good racers – including John Force – looking for a new ride for the 2015 season. Fortunately for Ford, the Ford drivers and the NHRA fans, that hasn’t had any impact on the current season as John Force has proven to once again being a dominating force (no pun intended) in the Funny Car segment with his supercharged Mustang.

64 year old John Force came into this weekend’s Toyota Nationals at The Strip at Las Vegas Motor Speedway following back to back wins in the previous two Countdown to the Championship events. John Force routinely been one of the top dogs in the Funny Car class all season but as has been the case in so many years before, Force and his Castrol motor oil Ford Mustang came on strong at the most important point in the season. His back to back to back wins have put him 152 points ahead of Dodge Charger driver Matt Hagan and since there only one event remaining in the 2013 season, Hagan can only pick up 150 points in the season finale as a best case scenario.

John Force and his Ford Mustang funny car got off to a great start in Las Vegas with a track record qualifying time of 4.011. That gave Force his 145th career top qualifier slots in the bracket and his 57th win from the top qualifying spot in 617 career events. Force beat Del Worsham, Gary Densham and Alexis DeJoria to advance to the finals where he went head to head with his lovely daughter Courtney Force – beating her with a 4.062 to her 4.085.

“This is probably the most stress I’ve ever had,” Force said. “I just gave the worst top end interview I ever did (because) I couldn’t believe that we got here. Racing my daughter in the final with the championship on the line. She wanted to win but, at the end of the day, the fans won.”

All of these statistics are not just impressive; they are really unlike anything that we have seen in any form of motorsports in the United States with Force being the most dominant driver in the sport for decades. No other driver - not Richard Petty or Jimmie Johnson or Michael Schumacher anyone else has dominated their sport like John Force and best of all…he isn’t done yet. During his post-race interviews after the 2013 championship clinching win, Force stated that he would be back next year with the intention of winning his 17th championship.

“We got (this first) Mello Yello championship,” Force said, “but next year I’m going to try and win again. You take it for granted when you win. Then, when you lose, you are looking through National Dragster seeing if you are in there anywhere. I’m going for No. 17 next year. I’m going to be around a while.

“I do love it and I’m going to stay out here until I drop,” Force said. “If I ever had to win, this was the time to do it. I was winning with Mike Neff and then we switched it up (in mid-season when Force went over to Prock’s car and Hight over to drive for Neff).