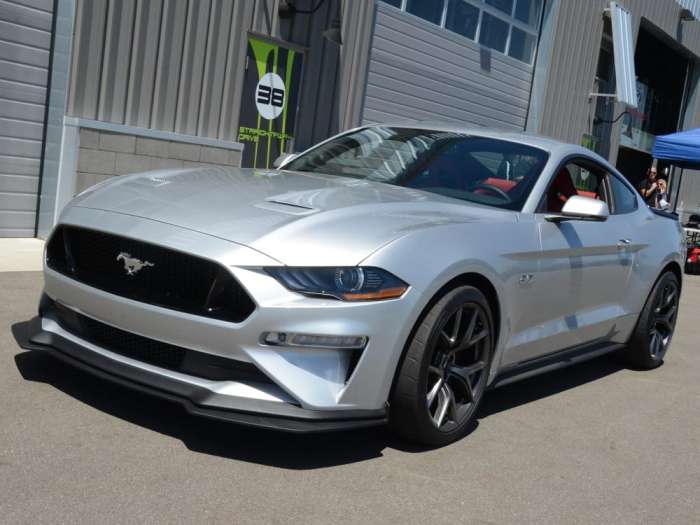 Imagining a Ford Mustang with the All-Electric SUV Drivetrain

Ford has stated that the Mustang will eventually receive some sort of electrification and while many people assumed that it would be a hybrid, perhaps the company will use the all-electric drivetrain from the upcoming Mustang-inspired SUV that has been discussed under the name Mach 1.
Advertisement

The Electric SUV
We have known for some time now that Ford is working on an all-electric SUV that has been designed with heavy Mustang inspiration. The company issued the first official teaser image a few weeks back, revealing a rear end that looks a great deal like that of the Mustang, showing that the company wasn’t kidding when they said that the electric SUV would be inspired by the pony car.

In addition to having exterior styling cues from the Mustang, it is expected that the all-electric SUV – which Ford has said will not be named the Mach 1 – will offer sporty driving dynamics that are also inspired by the pony car. Of course, we don’t expect that the electric SUV will be as fast or handle corners as well as a modern performance car, but it seems likely that the vehicle being discussed under the name Mach 1 will offer some driving excitement.

Electric Mustang
I am sure that some Mustang and muscle car/pony car fans are freaking out over the thought of an electric Ford Mustang, but that is the current direction of the auto industry. More importantly, Ford execs have stated that an electrified Mustang is coming and we have speculated that there would eventually be a hybrid Mustang – possibly using the 5.0-liter V8.

However, an all-electric Mustang could offer superior performance to a hybrid package while being less complicated and, along the same lines, less expensive. Figure that the drivetrain in the Mach 1 has been designed for a larger, heavier vehicle and as an SUV, it will likely have all-wheel-drive. In the Mustang, that drivetrain would be powering a smaller, lighter vehicle and only spinning the rear wheels, so the power would go much further in making for a quick, all-electric Mustang.

Would that go over well with hardcore Mustang enthusiasts? Probably not, but introducing an all-electric Mustang alongside the gasoline-powered versions would allow the company to promote new technology while still satisfying the demands of those folks who want a big, powerful V8.

DeanMcManis wrote on September 13, 2018 - 4:02am Permalink
I think that it would be great to offer the Mustang with an EV drivetrain and big battery. The one issue that comes to mind first is space. Big batteries are heavy and take up a lot of space. Granted, with some creativitiy you could split the load of a bigger battery between the engine compartment and the trunk. I do not think that the Mustang has anywhere near the space under the floor to house a big battery the way that SUVs and dedicated BEVs can. You wouldn't want all of the weight up front as that would throw off the car's handling balance badly. One thing that V8 engine lovers would appreciate about an electric motor is the massive and instant torque. While that is not going to sway hard core Mustang V8 fans who will miss the thundering V8 roar, buyers who want the style of a Mustang, and the quick speed, and who don't want the econobox look, could be enticed into buying a Mustang BEV. If Ford can fit a big enough battery to give the EV Mustang 150-200 miles of range, then I think that it would be a big hit. But frankly I see Ford going first with a turbo-4 engine combined with a smaller battery as a PHEV. Ever since they came out with the Fusion PHEV in 2013, I wondered why Ford didn't instantly offer a quicker version of their PHEV drivetrain in the Mustang and Lincoln models. But as opposed to the 50 mile+ EV range of the Volt, the PHEV Fusion Energi originally offered a meager 13 miles, and now has boosted that to 25 EV miles of range in the 2019 model. Ford would leap ahead of GM and Chrysler if they came out with a full BEV Mustang, but frankly I do not see them being that brave. Especially with their new announcement cutting their model line up dropping sedans and small cars. But a bold move here would net them increased sales and EV market credibility beyond their competition. Especially if they offered a BEV Mustang around the price of the Mustang GT. I would be sorely tempted to buy one myself.
Jeff wrote on November 13, 2018 - 5:56am Permalink
I will be forced to buy the i pace to replace my current mustang GT if they can't get the all electric mustang out soon. I am nearly going bolt, but not cool enough. C'mon, some of us are ready.
DeanMcManis wrote on November 13, 2018 - 11:01am Permalink
I think that it is important that Chevy already hinted at their offering a new hybrid Camaro with 545HP and 24MPG. It's not a full-on BEV commitment, but it is an exciting alternative to just gasoline engines in Ponycars. I doubt that it will get any reaction from the Hellcat Challenger crowd, but it should make Ford nervous. Historically Chevy has been leading with BEV vehicles like the Bolt, whereas Ford doesn't have any long range BEV offerings yet. But since they are cutting their car lineup, they had better expand their BEV offerings across the rest of the lineup to stay competitive. The Mustang is a great place to start. The coolest idea would be for Ford to build a electric Ford GT to compete against the upcoming Tesla Roadster!