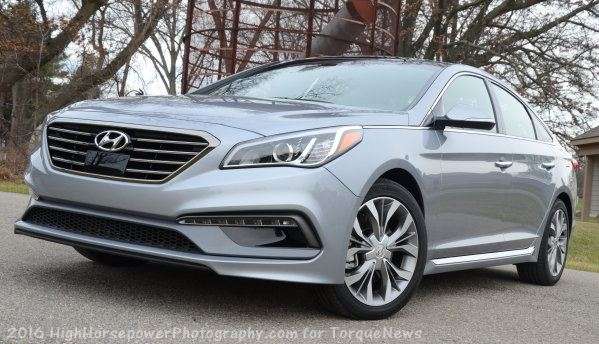 The Hyundai Sonata 2.0T is a Midsize Sedan for Those Who Enjoy Driving

The Hyundai Sonata has come a long way over the past few years in terms of interior amenities and exterior styling, but if you enjoy driving and you are shopping the modern Sonata family, the 2.0T package is the trimline for you – with a 245hp turbocharged engine, a sport tuned suspension, a drive mode program and a unique steering rack that makes this Hyundai far more fun to drive than past iterations.
Advertisement

Of all of the automotive segments in the US market, the midsized sedan group is often labeled as being the least impressive, the least exciting, the least fun to drive and the most appliance like – mainly because for a very long time, those labels were all pretty accurate. This was particularly true of the Hyundai Sonata through the late 1990s and the majority of the 2000s, but like the rest of the segment, the Sonata has gone through an extensive transformation which has led us to the 2016 version of Hyundai’s midsized sedan.

Even before the Sonata moved into this current generation for the 2015 model year, Hyundai had began packing more and more features into this roomy midsized sedan without pushing the pricing higher than the key competitors. Thanks to this approach, the Sonata (and most other Hyundai models) offers a tremendous amount of interior content for the price, but even as the Korean automaker moved to this upscale feature-low end price approach in the previous generation of their popular midsized sedan, the car still wasn’t a whole lot of fun to drive.

Hyundai addressed that criticism with the introduction of the Sonata Turbo package during the previous generation, but with the 2016 2.0T package, the company has created the most enjoyable Sonata for those who enjoy driving.

Turbocharged Power
The key component and the feature which makes the 2016 Hyundai Sonata 2.0T so much fun to drive is the turbocharged 2.0L 4-cylinder engine, which delivers 245 horsepower and 260lb-ft of torque to the front wheels via a 6-speed automatic transmission. This 2.0L engine is a little lighter on power than the previous generation Sonata Turbo, but it is still the most powerful engine in the current Sonata lineup and – more importantly – it rivals the sporty models of the segment’s most popular models. If you look at cars like the Ford Fusion, the Chevrolet Malibu, the Honda Accord, the Toyota Camry and the Nissan Altima, they each have a premium engine option with comparable power to the Sonata 2.0T. The Fusion and Malibu both have their own 2.0L turbocharged engines, with the Ford offering identical horsepower with a touch more torque while the Chevy offers a touch more horsepower and identical torque. The Accord, Camry and Altima derive their premium power from a V6 engine, all of which have a slight advantage in horsepower, but a disadvantage in torque and front end weight.

In short, the 2016 Sonata Turbo isn’t going to blow away the competition, but even when compared to the bestselling models in the segment, the Hyundai no longer needs to be labeled as the sluggish sedan in the group. (More on Page 2)

Around town, the Sonata Turbo packs plenty of power to get away from a stop in a hurry, allowing you to rush out in front of a slower lane of traffic or to zip along a twisty backroad with enough urgency to make for a fun drive. There is very minimal turbo lag, so when you ask for the available power – the Sonata replies quickly – making it a strong performer through the low-end and midrange. That midrange power leads to excellent performance on the open road, allowing you to easily scoot past slower moving vehicles while comfortably eclipsing any posted speed limit in my area. Mind you, we aren’t talking “let’s go to the track” power, but compared to the boring midsized appliances that are a bore to drive – the new Sonata Turbo never feels short on power no matter where you are driving.

More than Turbo Power
While the most noticeable feature of the Hyundai Sonata 2.0T trimlines is the quick-revving, 245hp turbocharged 2.0 liter engine, Hyundai didn’t just drop a turbo engine in a Sonata and call it a sport model.

Instead, Hyundai added unique body bits to get the turbocharged Sonata a sportier look and, more importantly, the Korean automaker added a unique steering system, a sport tuned suspension setup and package-specific wheels wrapped in all-season performance tires. When coupled with the Drive Mode system set to “Sport” and the paddle shift system of the 6-speed automatic transmission, the Sonata 2.0T really is a great deal of fun to drive as midsized sedans go. When you select Sport mode, the throttle response is sharper, the transmission shifts are harder and the steering system offers less assist combined with greater feedback. The Sport Tuned suspension allows you to push the Sonata hard into turns with the only weak spot being the slipping point of the standard all season tires, but as well as the Sonata 2.0T handles, it still offers a smooth ride for daily driving. The paddle shifters give the driver a great deal of shift control, making the car more fun to drive through tight, twisty roads and even when left to shift on its own – the 6-speed transmission in Sport mode does a great job of extending the gears for improved performance. (More on Page 3)

Or course, it should be noted that while the Hyundai Sonata 2.0T is a far more fun to drive than past models in the midsized sedan segment, it still preserves all of the key features to make it a great daily driver as well. When you aren’t mashing the throttle or tossing the car through turns in Sport mode, the Sonata engine offers smooth power delivery for normal driving situations, the interior is quiet and very little harshness from the road makes it through the suspension or the steering system. Some sporty sedans ride rougher than their lower performance counterparts, but the Sonata 2.0T is just as great of a daily driven sedan as the rest of the model line.

Big Fun, Small Price
Most importantly, if you are shopping around for a turbocharged midsized sedan that balances performance and efficiency, the Sonata 2.0T has an advantage over the competitors.

The Sonata Sport 2.0T trimline packs all of the features which combine to make the Turbo package so much fun to drive, including the 245hp engine, the sport tuned suspension, the unique sport steering system and the 18 inch alloy wheels wrapped in all season performance tires – as well as chrome tipped quad exhaust, a rear diffuser and heated sport bucket front seats with leather bolsters and cloth centers. The Sport 2.0T package for 2017 has an MSRP of $27,435 including destination. Those who want a little more luxury from their sporty, turbocharged Sonata can opt for the $35,185 Limited 2.0T trimline, which features all of the performance goodies of the Sport package, but adds a long list of nicities like the panoramic sunroof, the premium infotainment system, power/cooled front seats and a bevy of high tech safety features.

The cabin of the Sonata Limited 2.0T is impressive, but for the sake of this review, I am focusing strictly on the fun-to-drive factor of the turbocharged engine package and if you are more concerned with driving excitement and saving money than you are with a long list of safety gadgets – the Sport 2.0T is an awesome option with a price under $28,000 out the door. For comparison, if we look at the Chevrolet Malibu, the Toyota Camry, the Nissan Altima, the Honda Accord and the Ford Fusion in their least expensive forms with a comparable engine option (in terms of power), the Sonata Sport 2.0T is one of the most affordable of the bunch at $27,435.
-The Nissan Altima 3.5SR with the 3.5L V6 starts at $27,990.
-The Chevrolet Malibu 2LT with the 2.0L turbocharged engine starts at $29,495.
-The Honda Accord EX-L V6 with the 3.5L V6 starts at $30,895.
-The Toyota Camry XSE with the 3.5L V6 starts at $33,510.
-The Ford Fusion SE is available with the 2.0L EcoBoost engine as an upgrade, resulting in a price of $26,885 and making it the only midsized sedan with comparable power to undercut the price of the Sonata Sport 2.0T – although the Fusion SE doesn’t offer the sport tuned suspension, the sport tuned steering and the interior features of the Sonata Sport 2.0T. (More on Page 4)

The Final Word
The newest Hyundai Sonata Turbo models with the 2.0T don’t have any one aspect that is going to allow this sedan to definitively stand out over the other cars in this insanely popular segment, but when you look at all of the features – the newest Sonata is an impressive all-around package. The Sport 2.0T model includes all of the items needed to make the Sonata more fun to drive than any past Sonata for less money than the competitors’’ similar vehicles and for those who want more luxury – the Sonata Limited 2.0T combines power and premium features (although with a far higher price). For those midsized sedan shoppers who want a car that is as inexpensive as possible while still being fun to drive, the Hyundai Sonata Sport 2.0T is easily one of the most exciting options in the segment for the money and for those who want lots of premium features without paying $40k – the Limited 2.0T could be their next new car.

John Goreham wrote on August 10, 2016 - 8:18am Permalink
I am not normally impressed by 2.0-Turbos, but Hyundai's is outstanding and it works perfectly with the transmission.