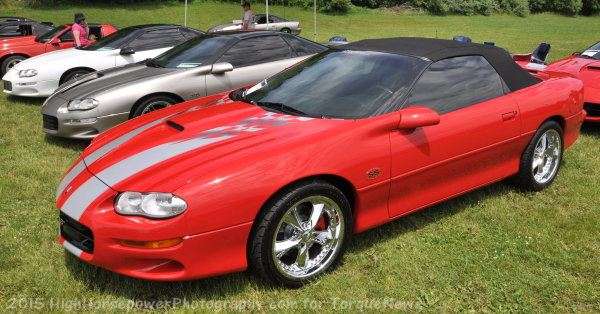 As we continue on with our history of the Chevrolet Camaro engine that we started when GM offered up a brief look at the Chevy muscle car history and today, we look at the 4th generation of the Camaro – which ushered in a new look, new engines and much bigger power.
Advertisement

The 3rd generation of the Chevrolet Camaro were arguably the darkest days for the GM muscle car with 4-cylinder engines that offered less than 100 horsepower and V8 engines that fell well short of 200hp early on. Late in the run of the 3rd gen Camaro, horsepower figures were improving a great deal, but when the 4th generation Camaro was rolled out for the 1993 model year, it brought with the new styling a pair of new engines that were a huge step up from those mills used during the 3rd gen.

1993
When the 1992 Camaro capped off the 3rd generation, the base V6 was a 3.1L mill with 140 horsepower and the top of the line V8 was the L98 5.7L with 245 horsepower. There were also three lower performance V8s in the middle, but when the 1993 Camaro introduced the 4th gen – there were only two engines available.

The base model 1993 Camaro engine was a new 3.4L V6 with 160 horsepower and 200lb-ft of torque, making the new V6 comparably powerful to the mid-level V8s of the 3rd generation. The other engine was the LT1 V8, which had debuted in 1992 under the hood of the Chevrolet Corvette. In the ’93 Camaro, the LT1 delivered 275 horsepower and 325lb-ft of torque, making it the most powerful Camaro since the big block Camaros in 1971. 1996
For the 1996 model year, the 3.4L V6 was gone and the 3.8L mill from the Californian 1995 Camaro was the standard engine around the country with 200hp and 225lb-ft of torque. Due to a new catalytic converter setup, the LT1 V8 also got a bump in power, now offering 285 horsepower and 325lb-ft of torque. There was also a Camaro SS package introduced in 1996, built by SLP, but available through Chevrolet dealerships. The Camaro SS still used the LT1 engine, but thanks to a ram air hood design and a freer flowing exhaust system, the SS package offered 310 horsepower.

1997
The 1997 Camaro used the same 3.8L V6 and LT1 V8 with the same power ratings as the 1996 model year, but there were a limited number of 30th Anniversary Camaro SS models built by SLP with the LT4 V8. This Camaro SS with the LT4 offered 330 horsepower at a time when the Mustang GT offered just 215 horsepower.

2002 was the final year of the 4th generation Chevrolet Camaro and, at the end of 2002 model year production, it was believed that the Camaro was dead. Unbelievably, General Motors had made the call to pull the plug on the Camaro so it appeared as though the final engines for the famed GM muscle car would be the 200hp 3.8L V6 and the LS1 V8 with power ranging from 310-325hp. Fortunately, GM brought the Camaro back for the 2010 model year with new engines and new power levels that far surpassed any Camaro engine lineup in history.

Check back to TorqueNews tomorrow for out final chapter of the Camaro engine history, and click any of the links below if you missed any of the first three generations.
1st generation
2nd generation
3rd generation

Donald Stinson wrote on June 8, 2016 - 7:13am Permalink
I bought a 2000 Camaro SS last year because of the LS1 and I know that one day these cars will be a collector's item, since this was the last production Camaro I think 2010. The 1994 to 2002 is when the performance started to come back. My favorite Camaros was the first gen. Then the second gen. I did not like the third gen. I wasn't to crazy about the style of the fourth gen. But it has grew on me and the performance is almost that of the Corvettes. The handling is extremely well especially because of the wide footprint and suspension which compliments the LS1. Mine is a hardtop coupe with 109K miles, and it is just getting broken in good. The only problem I have with mine is a problem with the air conditioning.
kirkland simon wrote on May 14, 2017 - 5:40am Permalink
I also own a 1999 z28 convertible and found out the power it puts out is remarkable,handling and style great. Only have 88,520 miles on it and runs like it has less miles. These cars are sleepers on street and it gets great looks from those other "guys".
Usher wrote on May 1, 2019 - 7:55pm Permalink
I am looking to buy 1995 Camaro v6 this week for $2,990. Any advice please email and let know.
ARTHUR M ALSTON wrote on March 26, 2020 - 1:24am Permalink
WHAT'S THE DEAL 3.4 V6 IN 2020 CAMARO OR AM I READING THIS WRONG , IS IT THE SAME 3.4 THEY PUT IN THE 95?