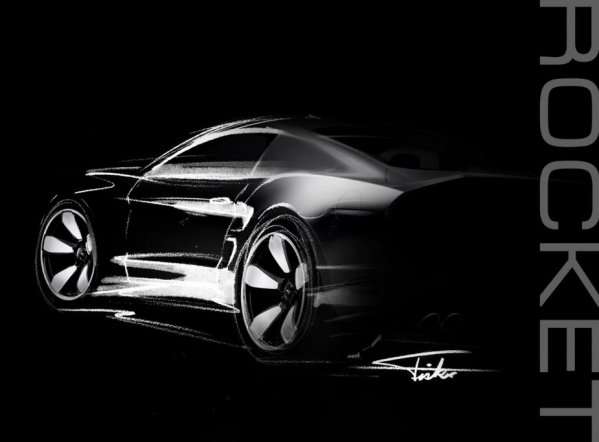 Well known automotive designer Henrik Fisker will be bringing a customized 2015 Ford Mustang to the 2014 Los Angeles Auto Show with a unique carbon fiber body and the name Rocket – but it is unknown what exactly Fisker plans to do with his modified Mustang.
Advertisement

When it was announced a few weeks back that Henrik Fisker would be introducing a new American muscle car at the 2014 Los Angeles Auto Show, it raised a great many questions. With his broad, successful design background, I expected that it would be something impressive to look at, but I really didn’t have any idea what to expect. I certainly didn’t expect that Mr. Fisker would be rolling out his own rendition of the 2015 Ford Mustang.

Fisker has Designed Around the World
Before talking about the customized 2015 Ford Mustang called the Rocket, a quick bit of information on Henrik Fisker. Through the 1980s and 1990s, Fisker worked in the design department for BMW and he worked on many projects including the BMW Z8 roadster. In 2001, Fisker moved over to Ford Motor Company, where he held the position of design director for Aston Martin and the director of Ford's Global Advanced Design Studio (CAPC) in Irvine, California. Fisker also served on the Aston Martin board of directors for some time. Oh, he also penned the initial design work for the Tesla Model S sedan.

After working with Ford and Aston Martin, Henrik Fisker left behind the big corporate gig to start his company Fisker Coachbuild, which built custom cars based on production vehicles from other companies and from that company came Fisker Automotive.

Fisker Automotive burned bright and burned fast with their sole car – the Fisker Karma. This extended range electric vehicle wore a striking exterior design, a super plush cabin and a very similar drivetrain to that found in the Chevy Volt. It was a super-premium luxury EV, but the company wasn’t able to stay afloat long enough to last. Fisker left the company that wore his name and Fisker Automotive was sold to a Chinese investor.

The Fisker Rocket 2015 Mustang
All that we know about the 2015 Ford Mustang modified by Henrik Fisker is what we can see in the teaser image shown above. The exaggerated lines predict a substantial wide body package, which will likely be heavily comprised of carbon fiber. The Rocket Mustang looks like it probably wears some massive wheels (both in height and width) and it looks like there could be some openings in front of the rear wheels.

Fisker has teamed up with Galpin Auto Sports, a company with more than their fair share of customizing Ford Mustangs. Galpin was responsible for the GTR1 concept, which was basically a modern take on the Ford GT40 race car, and Galpin packed 1024hp into that beast. If Galpin worked the drivetrain of the Fisker Mustang to make it a true Rocket – this wide body Mustang could offer enough power to make the Hellcat blush. It should be noted that Galpin showed off a 2015 Mustang GT at SEMA with a 725hp supercharged engine, so that should be the least that the Rocket Mustang offers.