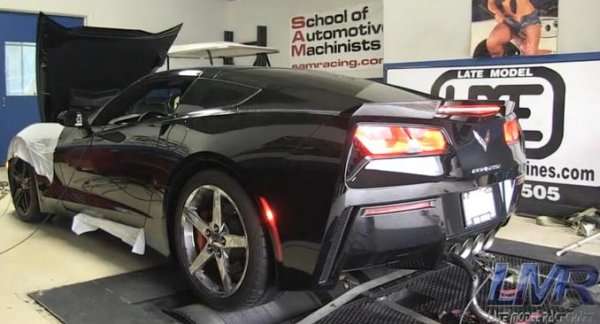 The folks at Late Model Racecraft are quickly asserting themselves as the best choice for 2014 Chevrolet Corvette Stingray owners looking to make big power and the video below shows that the new C7 Vette can make some very serious power with only a few fairly common modifications.
Advertisement

Late Model Racecraft was the first to post a video of one of their customer’s 2014 Chevrolet Corvette Stingray Coupes breaking into the 9 second quarter mile range and while they were fairly brief with their explanation of what was done to get that bright red C7 into the 9s – we do know that it had a set of high performance cylinder heads, a new camshaft package, long tube headers, a nitrous oxide setup and a high stall torque convertor. The company didn’t offer any estimates on the kind of power being put to the ground by that 9 second Stingray but this newer video from LMR shows a 2014 Corvette with the cylinder heads and camshaft package on a dyno with some very impressive results.

In addition to giving us a chance to see the 2014 Chevrolet Corvette Stingray in action on the dyno and seeing how much power new C7 owners can expect to get from a head and camshaft combo swap, this video from LMR offers us a great chance to hear the cammed Corvette rumble…and rumble it does. While sitting at idle, this black Stingray has the kind of low, lumpy sound that you would expect from one of the most powerful American performance cars ever built and at wide open throttle during the dyno run, this new Corvette’s roar is like music to my ears. It should also be noted that this Corvette is surprisingly quiet at idle when the cameraman walks around to the front of the car which would lead me to believe that this car has a stock exhaust system so owners can have this monster power setup and still live in a residential area without the neighbors calling the police every time they fire up the Stingray.

The result of the short dyno blast by this black 2014 Corvette Stingray is 526 rear wheel horsepower and when we take into consideration a very average drivetrain loss of 15%, this Corvette is making around 620 horsepower at the transmission. In stock form, the LT1 V8 of the 2014 Corvette offers 460 horsepower so that estimated figure of 620hp means that the LMR heads/camshaft package adds roughly 160 horsepower. I should point out that the 15% drivetrain loss is by no means set in stone so the actual engine horsepower figure could vary based on the drivetrain efficiency but with 526 wheel horsepower – there is a better chance than not that this LMR package brings the output of the C7 Corvette up to at least 600 horsepower.

The Late Model Racecraft website lists a variety of packages for the 2014 Corvette Stingray and their LMR630 package is likely what we are looking at in this video – although you would think that the video would mention some other features of the package in the dyno video. That package, which includes headers, the heads, the camshaft, an x-pipe and a long list of supporting mods to get those more significant features working together smoothly carries a list price of $12,999.99 and that LMR630 package is able to send the C7 down the quarter mile in 10.6 seconds at 128 miles per hour. Even if the video below is not the entire LMR630 package and it is just the heads and camshaft, this dyno video offers a pretty good look at what Late Model Racecraft is able to do with the new LT1 V8. Of course, if this black Stingray is fitted with the entire LMR630 package it looks like this new Corvette has a drivetrain loss of around 16.5% and if that is consistent among the new stock Corvette, the 2014 models would put down around 385 horsepower to the ground.

If you want your 2014 Corvette Stingray to be a touch quicker and more powerful than stock, Late Model Racecraft also has their LMR550 package that adds an intake setup, headers, the x-pipe and a performance tune to make 550 horsepower. LMR promises that the 550hp package will run through the quarter mile in just 11.3 seconds with a trap speed of 122 miles per hour and with a price of $5,499.99, the LMR550 is a little easier on the budget. In any case, LMR was the first to put the 2014 Corvette into the 9s and this short video below is a fine example of what a lightly modified, street-friendly C7 Stingray can do with the right tuning efforts.

Of course, those deeper pocketed buyers who want more than 460hp out of their C7 Corvette can also wait for the next generation Corvette Z06 that is set to debut in a few weeks at the 2014 NAIAS in Detroit with what many believe will be a supercharged version of the LT1.