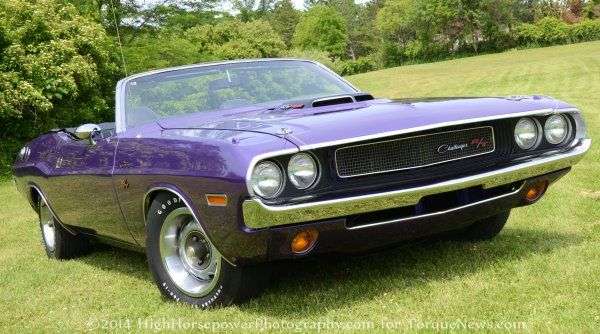 Brothers John and Horace Dodge founded Dodge Brothers Inc on July 1st 1914 so with the rising of the sun this morning, the Dodge brand of the Chrysler Group has officially turned 100 years old – and they celebrated this monumental event by introducing the most powerful American car of all time with the 2015 Dodge Challenger SRT Hellcat.
Advertisement

John and Horace Dodge got their start in the budding automotive industry in 1902 when they were making transmissions for Oldsmobile but shortly after, the Dodge brothers began working for Henry Ford. The Dodge boys manufactured almost every component of the Ford Model T and continued to do so until Ford completed his own manufacturing plant in 1914. Once that happened, Ford no longer needed the Dodge brothers so they went their own way and having been a part of the rise of the Model T – John and Horace knew how to build a car that would compete with the popular Ford.

While attending the 1920 New York Auto Show, Horace Dodge contracted pneumonia and John was quick to tend to his ailing brother. Sadly, John fell ill while watching over Horace and died just ten days after the start of the New York Show. Horace died a few months later after a long, painful battle with the illness. The brothers never got to see the real impact of their efforts on the auto industry, but the Dodge brand has been an innovator across multiple verticals within the industry – including essentially introducing the minivan and the American supercar.

Dodge Becomes a Performance Monster
Through the first 50 years, the Dodge brand was well known for offering a collection of reliable and affordable vehicles, but beginning in the 1960s – the Dodge brand took a new approach. With the introduction of the 426 Hemi in the 1966 Dodge Charger, the brand named after John and Horace asserted itself as one of the top options for those new car buyers who wanted to go very fast. Through the 1960s and early 1970s the Dodge brand’s reputation benefitted from models like the Charger, the Challenger, the Dart, the Demon, the Coronet and many other cars packed with big, powerful V8 engines with the mighty Hemi serving as the grand daddy of all American muscle engines.

The Dodge brand would see the performance capabilities fade through the mid to late 1970s, but in the 1980s the brand took a new approach to high performance with a collection of turbocharged 4-cylinder vehicles based on the Chrysler’s K platform. Cars like the Dodge Daytona, the Dodge Omni and the Dodge Charger offered comparable power to the likes of the Ford Mustang, but those Dodges put the power to the front wheels rather than the rear wheels as the popularity of front drive models boomed in the 80s. Also during the 1980s, the final rear wheel drive Dodge products rolled out of dealerships around the country and it seemed that the high performance Dodge cars of the good ol days were long gone.

Fortunately, Dodge reminded us all that they could build a really fast turbocharged, front wheel drive compact with the introduction of the Dodge Neon SRT4 for the 2003 model year. This was still a far cry from the Dodge muscle cars of the old days, but this spunky little sedan challenged the likes of the Mustang and Camaro just like the turbo Dodge products of the 1980s.

The Rear Wheel Drive and Hemi Return
Although the Dodge Viper introduced power like the American market had rarely seen since the 1970s in the early 1990s, the Dodge brand lacked that performance punch once the turbocharged front wheel drive models disappeared. However, that all changed when the then-new Dodge Charger was introduced for the 2006 model year. Powered by a new 5.7L Hemi V8, the Charger was one of the best performing sedans ever sold in America and when fans complained about the lack of a “proper” muscle car with only two doors – Dodge rolled out the modern Challenger for the 2008 model year with the new 6.1L Hemi. Dodge also had the Magnum sport wagon with the same 5.7L and 6.1L Hemi as the Charger and Challenger, but that high performance family hauler was quickly discontinued while the Charger and Challenger continued on.

Over the years since the modern Dodge Challenger and Charger were introduced, the Chrysler Group gradually increased the output of the various engines with the high end SRT engine being upgraded from 6.1L to 6.4L for the 2012 model year – which increased power from 425 to 470hp.

All the while that the Dodge Charger and Dodge Challenger were handing out Hemi powered beatings, the Viper lineup continued on with a V10 engine that made it one of the most powerful road cars in the world. The Viper was joined by an SRT-spec Ram 1500 pickup for a few years and the 500 horsepower Dodge Ram spent quite a bit of time as the fastest truck sold in the world.

The Future of Dodge Looks Very Bright
It is fitting that on the 100th birthday of the Dodge brand, the company unveiled the new 707 horsepower Dodge Challenger SRT Hellcat. The Hellcat powered Challenger is the most powerful American production car of all time – easily beating the best from GM, Ford and even the mighty Viper. We can expect that the Dodge Charger will also get the Hellcat engine in the near future and those two incredible muscle cars will be joined by a new high performance Dart and Journey within the next few years.

So, as a proud owner of a collection of Dodge products, I want to wish the folks at the Dodge brand a very happy 100th birthday – here’s to many more years of exciting, high performance vehicles that would surely make John and Horace Dodge very proud.
Shown above is the 1970 Dodge Challenger Hemi Shaker Convertible – one of the most sought after and most powerful muscle cars from the classic American performance era. With the Hellcat Challenger getting official power figures today, it seemed fitting to show the original Hemi Challenger that has become one of the most desired collectable cars in the history of the American auto industry.