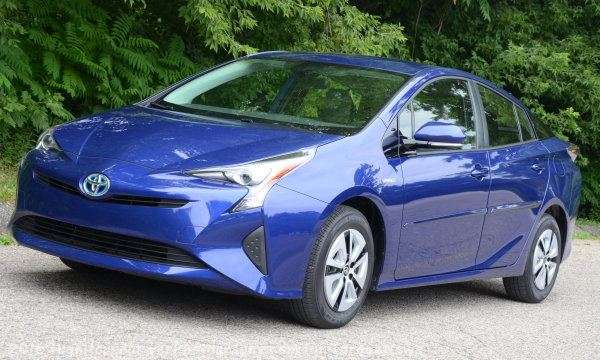 I recently made an 800 mile trip with the new Toyota Prius to catch the Pittsburgh stop of the Guns N Roses “Not in This Lifetime” tour and in addition to keeping my gas costs under $30, the Prius proved to be a great road trip vehicle and a great vehicle to take to the show.
Advertisement

Ten years ago, if someone had told me that in the year 2016, I would be driving a Toyota Prius to a Guns N Roses show, I would have assumed that you were on some sort of heavy drugs. In 2006, I worked as an accountant, I drove a 500hp rear wheel drive car and a 400hp rear wheel drive truck and it was all but certain that Guns N Roses as we knew and loved them in the 1990s would never return to that form due to the strife between the key members of the original band.

Fast forward to 2016 and while I still have a stable of high powered rear-drive vehicles, I am fortunate enough to have a job which allows me to test a great many new vehicles; including the 2016 Toyota Prius. More surprisingly, the key members from Guns N Roses have made up enough to get the band back together for the “Not in This Lifetime” Tour. As a fan of the band back in the day, I was excited to have a chance to see them live and best of all, the tour was opening right down the road from me in Detroit. There was plenty of skepticism about whether or not they could put on a good show, but all of those critics were silenced when Axl, Slash, Duff, Richard, Dizzy, Frank and Reese rocked out for the Ford Field crowd.

That Detroit show was everything that I had hoped for and more, and I immediately began planning the trip to Pittsburgh – where I grew up and went to college – for my second show of the tour. The Pittsburgh Guns N Roses show was Tuesday July 12th and that week, I was scheduled to test the 2016 Toyota Prius. I was going to a Guns N Roses show in 2016 in the new Toyota Prius.

Say what you will about how a Guns N Roses fan should attend a show in a 3rd gen Camaro or a jacked up Ford truck, but my trip to Pittsburgh would cover more than 800 miles and I was happy to be driving one of the most efficient cars sold in America.

The Test Vehicle
Before getting into my road trip, a quick look at the car that would get me to the Pittsburgh Guns N Roses show.

As you can see above, my 2016 Prius test car was finished in beautiful Blue Crush Metallic and this particular class-leading hybrid was fitted with the “Two Eco” trimline. This is basically a base model with a few upgrades over the Prius Two, along with a few changes which help improve fuel economy numbers. The “Eco” package adds LED projection headlights with auto on/off, unique 15 inch alloy wheels, the Smart Key entry and push button start system and a tire inflator kit rather than a traditional spare tire. The base price of my Prius Two Eco was $24,700, but when you add in the floor mats, the cargo net, the rear bumper applique, door edge guards, wheel looks, body side moldings and delivery fees, the price as tested rises to $26,357.

The Long Highway Drive
I set out from Michigan in the new Prius with a full tank of gas and a flash drive with every Guns N Roses album, making the 350+ mile trip south to the Ohio Turnpike and then east into Pennsylvania. The speed limit along much of the route is now 70 miles per hour, and with the cruise set just over that, the Prius is slightly out of its “sweet spot". In the days leading up to the road trip, I was averaging nearly 70mpg, but on the drive from Michigan to Pennsylvania, I “only” averaged around 64mpg – largely due to the fact that road work kept speeds down closer to 60 miles per hour. On that long highway drive, I found the driver’s seat and my positioning relative to the steering wheel to be very comfortable for 5+ hours. Of course, I didn’t need to stop for gas, so that first leg of the trip to Pittsburgh was spent cruising a few miles per hour over the speed limit and jamming to some classic Guns N Roses. During this length portion of the trip, I took note of how quiet the cabin was when the windows were rolled up, with very little road noise or wind noise making it inside the car. Before heading out, I paired my phone with the car’s infotainment system and when I answered the phone using the hands-free system, I was easily able to hear the person on the other end and they could hear me, without any interruption from exterior noise.

While making the drive, I had a chance to play with the various drive modes and to see how the cruise control system reacted to the drive modes - and how it impacted mileage. Regardless of the drive mode chosen, I found that driving without cruise control yielded better fuel economy numbers. Even when the car was set to Eco mode, the cruise control was slightly less efficient than my right foot, but I did use the cruise for most of my trip, as I was interested in a comfortable trip more than mind-blowing fuel economy. In terms of drivability in the different modes, Eco really softens up the throttle, to the point where you find yourself asking hard to keep the car going 70+ miles per hour. On the other hand, the Power driving mode makes the throttle very crisp and responsive, but it clearly hindered my MPGs, so I left the car in Eco mode for much of the drive since throttle response during a 350 mile highway drive isn’t all that important to me. In terms of the highway drive, I have no complaints about the 2016 Toyota Prius, as it got great fuel economy and I was comfortable driving the entire time. This is a trip that I have made many times in many different vehicles, and spending 5 hours in the driver’s seat can often reveal discomforts along the way, but the Prius driver’s seat, the arm rests and my general positioning relative to the controls never grew to be uncomfortable on that long drive.

Heading to the Concert
Once I got into Pittsburgh, I made my way to my parents’ house – which gave me a chance to test the new Prius on some twisty back roads that are unlike anything that I have in Metro Detroit. I learned to drive on these tight, curvy roads and they haven’t changed much, so I know them well. I pushed the new Prius hard along these twists and turns and much to my surprise, the world’s bestselling hybrid handled the pressure very well. Now, I’m not saying that the Prius is a great weekend track toy, but compared to the Prius of past years, this new model handles very nicely. With the car set to Power mode, I would go so far as to say that the Prius was fun to drive through these twisty back roads. After visiting with my parents for a while, I headed out to pick up my friends and head to the Guns N Roses concert at Pittsburgh’s Heinz Field. There were four of us going and we were planning on taking two coolers packed full of food and libations, a travel grille and a few bags of random grocery items like buns, toppings for the burgers, etc. Much to my surprise, the four of us all fit comfortably into the Prius and we were able to fit all of the cargo in the back with some room to spare. None of us thought to bring chairs, but if we had, they would have fit into the cargo area without any issue. Although we headed towards the concert venue some 5 hours before the show began, we still ran into dense traffic in downtown Pittsburgh. It was 101 degrees according to the Prius, yet even in EV mode, creeping through traffic, the car kept us all nice and cool. We spent more than an hour inching through Pittsburgh, looking for parking, and we did much of that driving on battery power. When combined with the other lower speed driving that I did around town, my mileage eased towards 70mpg for the trip. We eventually found parking (for $40) and were able to unload the grille, bust open the coolers and spend some time hanging out with the Prius sound system continuing to provide the Guns N Roses. After the show, we spent another hour creeping out of town, again mostly in EV mode, and there was enough passenger space for the two people in the back seat to fall asleep on the drive home.

The End of the Trip
After a great day spent with friends and a great night spent listening to Axl Rose, Duff McKagan, Slash, Dizzy Reed, Richard Fortus and Melissa Reese bring Guns N Roses back to life, I woke up the next morning and headed back to Michigan. The drive home to Milford was fairly uneventful, with less traffic a slightly higher average speed and slightly lower fuel economy numbers. As was the case on the way to Pittsburgh, I was just as comfortable when I pulled into my driveway in Michigan as I was when I set out from Pennsylvania. More importantly, the new Toyota Prius was comfortable for me on the long legs of the road trip, it was comfortable for all four of us heading to and from the concept and it had plenty of room for the items needed for a proper Pittsburgh tailgating experience. The sound system isn’t mind blowing, but it sounds good even when turned up very loud and even when in Eco mode, the climate control system will keep the car ice cold on a 100+ degree day.

The Toyota Prius is often regarded as one of the industry’s best commuter cars, but in my experiences, it makes for a great road trip car and if you happen to take it tailgating for a Guns N Roses show – it can do that as well. Best of all, you can get all of the features mentioned in this review and the impressive fuel economy levels for less than $25,000, if you skip on some of the extras from my test car like the floor mats and exterior dress-up items.

For those wondering, Guns N Roses put on an amazing show in Pittsburgh. If you are a GnR fan and they are coming to a venue near you, take my advice and go to the show. They may not sound quite as good as they did 25 years ago, but they sounded incredible and they put on a stellar show in Detroit and Pittsburgh. I have spoken to a handful of fans who have gone to shows around the country during the “Not in This Lifetime:” tour and they all agree – this show is worth every cent.