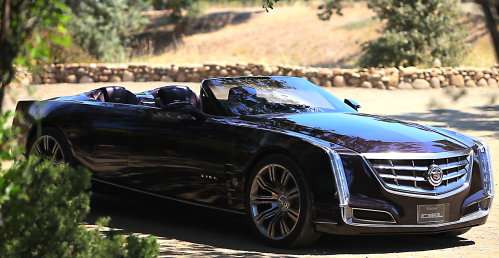 The Cadillac Ciel Concept (pronounced Cee-El) is like nothing else in the company’s lineup, with this cutting edge 4-door convertible offering room for four adults with luxurious amenities even greater than what we have come to expect from the Cadillac brand. GM states that the design inspiration for the Ciel Concept is drawn from the natural beauty of the California coast and for those of you who have had the luxury of cruising down Highway 1 – you can imagine the kind of beauty that they are talking about.

The Cadillac Ciel Concept wears a striking exterior design with sharply angular LED headlights flowing from the front face of the car up onto the top of the fenders, flanking an exaggerated take on the modern Cadillac grille design. The square shape of the front end is bold, almost looking like a futuristic take on the front end of the current Cadillac models but this open air concept maintains a sleek form even with the boxy front.

Along the sides of the Cadillac Ciel Concept, the door handles are flush to the body with the front and rear door handles mounted side by side thanks to the “suicide” rear door motion. The massive wheelbase presents a very luxorious look – almost like a topless stretch limo – with a sweeping body line coming up from the front end to cut through the rear wheel. Speaking of the wheels, the Ciel wears a set of unique 22” aluminum wheels tucked cleanly into the wheel openings that barely flare away from the body.

Out back, the Cadillac Ciel sports a set of massive LED taillights that pour from the top of the quarter panels down to the integrated chrome exhaust tips. The rear end of the Ciel is even more angular than the front with the chrome trim that runs the length of the vehicle dipping down across the rear face of the car, trimming the trunk opening.

Inside, the Cadillac Ciel Concept raises the bar for luxury car interiors with leather and wood trim looking more like something that you would expect in a Maybach or Rolls Royce. Lighted brushed aluminum door sills welcome all to the interior of the Ciel Concept and sloping bolsters make getting in and out easier for all. A wood trimmed center console runs from the dashboard all the way back to the rear of the passenger compartment, offering access to the Ciel’s advanced navigation system for all four passengers. As an interesting point, even though the Ciel is packed with wood trim, GM used the wood from just one Italian Olive tree that had fallen on the property of an olive oil producer so the company can say that “no trees were harmed in the making of this luxury car”.

To help make sure that the passengers are all comfortable during a cruise down the California coastline, the Cadillac Ciel features pull-out blankets are available for all three passengers that retract automatically along with heating and cooling capabilities for all four seating positions. Also, to protect the occupants from the elements, the Ciel includes a drawer containing sun lotion, sun glasses and towels as well as an aromatherapy system that is controlled by the rear passengers…although it’s unclear how much good aromatherapy can do in a big open air grand touring sedan like the Ciel.

Last but certainly not least is the drivetrain of the Cadillac Ciel Concept, with the popularly used 3.6L V6 engine from the likes of the Chevrolet Camaro modified to offer more power and better fuel economy. The extra power comes from the addition of a twin turbocharging setup that bumps the output to a very respectable 425 horsepower and 430lb-ft of torque and the added fuel economy comes via a dual-more hybrid transmission system that allows for all-electric driving at low speeds.

Check out the videos below for a closer look at the new Cadillac Ciel Concept as well as the gallery below which offers some still photography of this sleek new flagship convertible sedan.

timjustin wrote on August 20, 2011 - 9:22pm Permalink
This thing is straight out of the 50s. Love all the pictures that Cadillac released around this one! http://www.boldride.com/ride/2012/cadillac-ciel-concept
Devonya wrote on August 24, 2011 - 3:39pm Permalink
I would like to know, when and where willl the car be available. Im ready to purchase already.