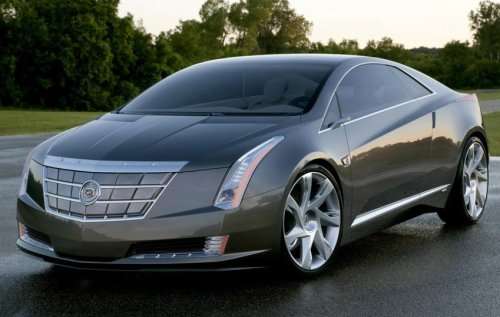 Since General Motors unveiled the Cadillac Converj at the 2009 Detroit Auto Show, there have been rumors of a luxury model based on the Chevrolet Volt but last night the General confirmed that there is officially a production version of the Converj Concept coming - the Cadillac ELR.
Advertisement

General Motors has offered very little information on the upcoming Cadillac ELR aside from the fact that it will be a 2+2 luxury coupe powered by a similar drivetrain as the Chevrolet Volt. Like the Volt, the Cadillac ELR will use a lithium ion battery mated to an electric drive unit for propulsion with a 4-cylinder gasoline engine providing range-extending charging capabilities – all of which will work together to drive the front wheels. The ELR could feature a refreshed version of the Voltec drivetrain but if nothing else, we can expect the new electric Caddy to offer the same fuel economy and electric range as the Chevy Volt. GM promises that they will be announcing the performance specifications, price and releasing timing “later” – presumably at whichever auto show where the company decides to debut the production version of the ELR.

Ed Welburn, General Motors VP of Global Design had this to say about the new Cadillac ELR:
“There’s no mistaking it for anything but a Cadillac, an aggressive, forward-leaning profile and proportion showcases a uniquely shaped, modern vision of a personal luxury 2+2.”

General Motors doesn’t offer any insight into how they chose the Cadillac ELR name but the automaker states that they picked that name to “indicate the car’s electric propulsion technology”. It can be surmised that the E stands for Electric and the L stands for Luxury but what about the R? What about revolution? With the Cadillac ELR being the first electric luxury vehicle, what better way to brag about that then to name it the Electric Luxury Revolution? Also, while the luxury automaker hasn’t offered a model year, there is a good chance that it will arrive sometime next year as a 2013 model.

Even before the first Chevrolet Volt hit US streets, it has been expected that General Motors would build a Cadillac model packing the Voltec drivetrain that would allow them to make more money off of this high tech electric powerplant and the Cadillac ELR should do just that. Throughout the early sales of the Volt, it has been pointed out that GM is actually losing money on the Volt due to the high cost of the technology. While it would seem to make sense that GM should just charge more for the Volt, the price of the electric Chevy is limited as it already costs a fair deal more (while also doing more) than its main competition, the Nissan Leaf. However, with a luxury version badged as a Cadillac, GM can charge significantly more and improve their chances of making money on their Voltec drivetrain.

General Motors hasn’t offered much information on the Cadillac ELR but they have been kind enough to offer a pair of videos (available below) that offers a good look at the sleek new electric Caddy. Check out the videos of the new Cadillac ELR and stay tuned to TorqueNews.com for all of your automotive news!

jamesmoberly wrote on August 19, 2011 - 6:29am Permalink
yes it is true you can save money on your auto insurance by making few simple changes search online for "Auto Insurance Clearance" you will be surprised. especially with higher gas prices I need to save on my auto insurance.
Anonymous wrote on August 31, 2011 - 3:49pm Permalink
The "Electric Luxury Revolution" would have been a slick handle for the new Caddy to go by. However it isn't.