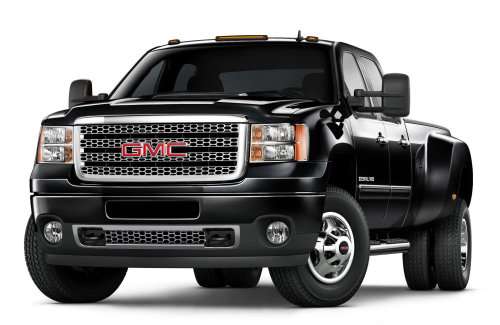 General Motors’ engineers have added new rear leaf springs, u-bolts, box reinforcements and shocks which allow properly configured 2012 GMC Sierra HD models to tow 23,000lbs with a fifth wheel setup, 18,000lbs with a conventional rear hitch and a hauling capacity of 7,215lbs – giving the 2012 GMC Sierra HD the tow of the class in all three of those categories. For comparison, the current (2011) GMC HD models with the maximum towing and hauling configuration tow 21,700lbs (5th wheel) and 17,000lbs (conventional) while hauling 6,635lbs so there have been significant improvements in the three major categories to help the General claim the title of the industry’s most powerful pickup.

The question is how long will this title last?

Starting in early 2010, Ford, Chrysler’s Ram Truck brand and General Motors have been gunning it out to show whose heavy duty trucks are the most powerful and most capable. GM announced early last year the 2011 model year numbers mentioned above, putting them atop the segment in terms of towing and hauling but in August 2010, Ford fired back with their new 400hp/800tq PowerStroke Diesel. That new engine pushed Ford to the top of the 5th wheel and hauling numbers before announcing a few months later that they had upped the conventional towing capacity. At that point, the Ford Super Duty was the king of the hill.

However, just a few days after Ford announced their revised conventional towing levels, Chrysler’s Ram Truck brand announced new specifications of their own; including 800ln-ft of torque and 22,700lbs of 5th wheel towing. This made the Ram HD the most capable truck until GM’s announcement today of the GMC Sierra HD’s new ratings but with auto show season (a prime time for announcements like new power and capacity ratings), we can expect Ford and Chrysler to fire back within the next few months.

Other General Motors News:
GM confirms the Cadillac XTS and ATS for 2012
General Motors to sell Chevy Spark in the US
Chevy Cruze helps GM lead the industry in July 2011 sales
The Camaro outsells the Mustang, Challenger, 370Z in July 2011
The Nissan Leaf clubs the Chevy Volt in July 2011
Production of the 2012 Chevrolet Sonic begins