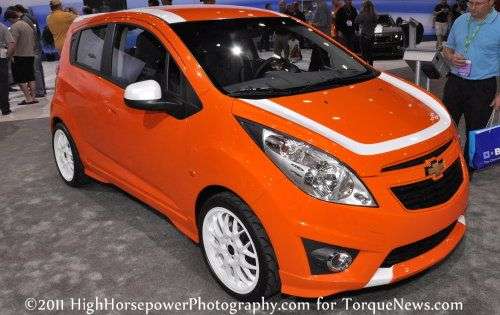 General Motors to sell Chevy Spark in the US

General Motors has paraded the Chevrolet Spark around the world as the smallest model ever badged as a Chevy but this A segment subcompact has not had a shot in the United States – but that will change when the new Spark arrives in the first half of 2012 as a 2013 model.
Advertisement

Little is known about the production form of the Chevrolet Spark that will be sold in the US market but earlier today, GM Communications guru Jason Laird Tweeted a comment by GM Product Chief Mark Reuss that the Spark minicar is destined for the US. Previously, the smallest car sold by Chevrolet in the United States was the Aveo (known now as the Chevy Sonic) in the B segment but when the Spark hits US shores next year it will mark the first time that Chevrolet has offered a vehicles in the A, B, C, D and E classes.

Typically, Americans have been less interested in tiny models like the Spark but considering the success of these models in Europe and Asia combined with the growing interest in models like the Fiat 500, General Motors believes that it has a case for selling the Spark in their domestic market. Most importantly, it will be interesting to see what drivetrains GM offers in the US-bound Spark as the overseas models rely on the likes of tiny engines measuring as small as 1.0L. A one liter engine might be just fine for someone who never leaves the city limits but for American highway travel, the Chevy Spark might need a little more gusto to be popular with US buyers…although the 47mph achieved be select Spark models overseas could certainly be a popular selling point.

General Motors could also be the first single brand to offer a vehicle in all five major car segments once the Chevy Spark hits our roads – opening the door for more A segment subcompacts/minicars from Ford, Chrysler and import competitors. The Spark made its global debut at the 2009 Geneva Motor Show but it has made its rounds through the US – including a stop at the 2010 SEMA Show in Las Vegas, helping GM to show off their flashy new Z Spec accessories line (shown on the Spark on the right).

The Chevrolet Spark is expected to hit US shores sometime in the first half of 2012 but considering the fact that it is slated to be a 2013 model year vehicle, we think that it will be more towards the middle of the year than the beginning.