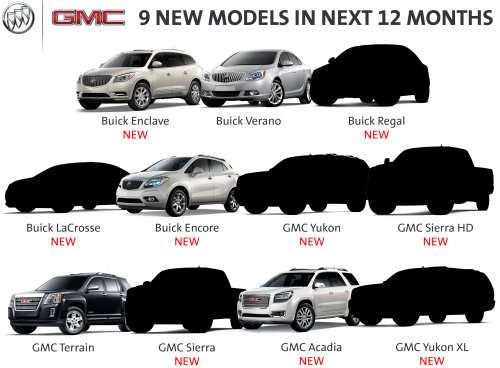 General Motors announced last night that the Buick and GMC brands would be receiving nine new models in their lineup over the next 12 months with some of the most popular vehicles in those two brands getting a refresh – including the Buick Regal, the Buick LaCrosse, the GMC Sierra and the GMC Yukon.
Advertisement

While the company has not given any definite indication as to when these new models would arrive, GM has stated that the there will be nine new models among the GMC and Buick brands over the next 12 months beginning with the new Buick Enclave, the new Buick Encore and the new GMC Acadia that we have already seen. However, joining those three models that have already made their auto show debuts will be a new Buick Regal and Buick LaCrosse along with a new GMC Sierra, GMC Sierra HD, GMC Yukon and GMC Yukon XL. There will also be a new GMC Canyon but it may come outside of that 12 month window.

We have known for some time that the General Motors full sized pickup family would be getting a redesign in the near future so news that there will be a new GMC Sierra and Sierra HD comes as no surprise. GM has stated that there will be a new GMC Canyon midsized truck coming but no timing has been announced for the arrival of that new model. With the full size trucks getting a facelift, a new Yukon and Yukon XL also don’t come as a shock as those roomy utes have generally shared a look with the Sierra pickups.

On the other hand, it seems surprising that the fairly young Buick Regal and the popular Buick LaCrosse will also see revamps of their own so soon after being introduced with their current generation.

The Buick Regal as we know it today was introduced for the 2011 model year so as the Regal enters its third model year, promises of a new Regal within the next 12 months seems awfully early. Regal sales have been fairly flat this year so perhaps GM hopes to reinvigorate interest in the midsized Buick sedan with a new look. Should the new Regal be introduced at the LA Auto Show or the Detroit Auto Show in January, I would expect the “new” Regal to be a 2014 model – meaning that the Regal that is currently available could only exist for 3 model years.

The Buick LaCrosse, which will also receive a new look within the next 12 months, has consistently been one of the brand’s most popular models over the past two years but with a slight decline in sales figures – it seems that GM is looking to keep things fresh among the affordable luxury brand. The current LaCrosse was introduced for the 2010 model year so if this new LaCrosse is a 2014 model year vehicle, the outgoing model would have lasted just 4 model years. Considering that the range topping Chevrolet and Cadillac sedans have gotten significant upgrades in the past year, it makes sense that the automaker would want to keep things fresh across the entire lineup their American brands.

“We’re not only selling more vehicles, we’re bringing new customers to the Buick and GMC showroom,” said Brian Sweeney, vice president of Buick and GMC Sales and Service. “Both brands report more than 40 percent conquest sales. Buick was the only automotive brand in the United States to reduce the average age of its buyer during the past five years, and GMC continues to attract more female buyers and – with Denali vehicles – more import and luxury owners.”

Once these 9 new models have arrived in the Buick and GMC lineups, the only “old” models left in these two brand lineups will be the Buick Verano and the GMC Terrain. The Verano was introduced for the 2012 model year so it is hardly an old model while the GMC Terrain has continued to be one of the brand’s bestselling models as it enters its 4th model year.

With the LA Auto Show just a few months away and the 2013 Detroit Auto Show coming in early January – we could have a look at a few of these models before the end of the calendar year.