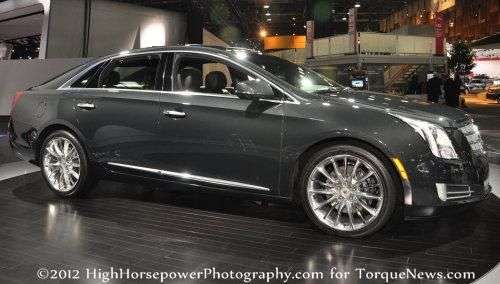 There were only 24 selling days for American dealerships in April 2012 compared to 27 days in April 2011 – a difference that caused a noticeable drop in sales figures for General Motors but when you look at the daily sales rate, GM was actually on a better pace in April 2012 than they were one year ago.
Advertisement

General Motors sold 213,387 vehicles in the US in April 2012, which presents itself as a negative growth of over 8% compared to the 232,538 vehicles sold in April 2011. However, if you look at the fact that GM sold 8,891 vehicles per day in April 2012 compared to just 8,613 vehicles per day in 2011 – the automaker was actually on a much better pace in 2012 as they sold 3% more cars per day. Based on their average through the shortened month, GM would have shown positive growth had the month not been so much shorter in terms of business days.

GMC was the strongest brand from General Motors in terms of growth with a jump of 4.5% compared to April 2011 but more importantly – daily sales jumped by 17.5% in selling 32,603 vehicles in just 24 days. GMC was led in growth by the Canyon compact pickup with an increase of 27% followed by the Sierra full sized pickup with an increase of 19.7%. The compact Terrain sport utility vehicle was the only other GMC vehicle showing a positive growth in April 2012, with an improvement of 8.8%. The Sierra pickup family was the top model from GMC in terms of sales volume with 12,598 trucks sold while the Terrain was second in sales with 7,839 and the Acadia was third with 6,087 large crossovers sold last month.

Chevrolet was second in terms of growth for GM but due to the shortened month – Chevrolet showed a negative growth of 8.4%. However, Chevy sold 3% more vehicles per day in April 2012 than they did in April 2011 en route to moving a total of 155,487 vehicles – third behind Ford and Toyota in terms of sales by brand. Chevrolet was led in growth by the innovative Volt electric vehicle that saw sales jump by almost 197%. The compact Colorado pickup was second in growth with an increase of 25.5% and the Avalanche pickup was third with a gain of 25.2%. In terms of sales volume, Chevrolet was led by the Silverado pickup family with 30,749 new trucks sold last month while the Malibu was second with 21,906 units sold and the Equinox was third with 18,282 units sold.

The Buick brand continued to struggle in April 2012 and the short month was not to blame as the affordable luxury brand sold fewer vehicles per day last month than they did in April 2011. Over, Buick’s 15,446 vehicles sold last month accounts for a decline of 16% from one year ago and based on daily sales rates – Buick showed a decline there of 6%. Every vehicle in the Buick portfolio showed a negative growth last month with the Enclave leading in sales with 5,000 units sold. The LaCrosse was second in sales with 4,545 sedans sold and the Verano narrowly edged the Regal for third with 2,989 units sold (Regal had 2,852).

Last and unfortunately least for General Motors was the Cadillac brand; which saw growth decline in April 2012 by 25%. The only vehicle in the Cadillac lineup to show positive growth last month was the Escalade EXT with the premium luxury pickup selling 4% more units than it did last April. After that, every vehicle showed negative growth although some vehicles (like the CTS) declined by less than 1%. If not for the short month…the CTS would have likely shown positive growth as well in April 2011. Caddy was led in sales by the CTS family with 4,202 sedans, coupes and wagons sold followed by the SRX crossover with 3,998 units sold. There was then a long drop to third with the standard Escalade SUV moving just 908 units last month.

Cadillac also sold 15.5% fewer vehicles per day compared to April 2011 but unlike Buick – there is an explanation for the slow sales in Caddy dealerships. Cadillac is nearing the introduction of the new XTS premium full sized sedan (shown above) and the new compact ATS – two very good reasons for prospective luxury car buyers to hold off on purchasing a new Cadillac right now. We can most certainly expect to see a spike in Cadillac sales once the XTS and ATS hit the market later this year.